Roots of the Hermetic Order of the Golden Dawn

[Author’s note: My initial speculation was warranted, it seems; additional corroboration in the following post (and comments): “Was Jacob Frank a Rosicrucian?“]

Some of the most revealing posts on their blogs, are: The Golden and Rosy Cross Worn by International Golden Dawn Imperator, David Griffin; The Red and Golden Cross; and significantly, The Sabbatian Qabalah and its relation to the Golden Dawn.

I wear a cross of pure 24k gold, enameled red, that derives directly from the 18th Century German Rosicrucian Order known as the Gold und Rosenkreutz. […] The Gold und Rosenkreutz Order, the Rosicrucian predecessor of the Hermetic Order of the Golden Dawn is, in fact, the source of origin of entire grade system of the Golden Dawn, as well as the mystic numbers of the grades, mystic titles, symbols, etc.

[…][W]hat we see here is a direct Rosicrucian lineage in the Golden Dawn descending from the Gold und Rosenkreutz order through the Asiatic Brethren and the Frankfurt-am-Main lodge Zur Aufghene Morg[e]nroethe, aka L’Aurore Naissante, aka Chevrah Zerach Bequr Aur in Germany.

In my book over the Bavarian Illuminati it was established that the Gold- und Rosenkreutz [Golden and Rosy Cross] were the enemies of the Illuminati and vice versa. Why? 1) They were competitors for initiates; 2) Illuminati were rationalists and outright worshipers of reason, while the Rosicrucians pursued mysticism and theosophy and indulged in all manner of practical occultism (séances, theurgy, thaumaturgy, astrology, sorcery, kabbalistic magic and alchemy), which the Illuminati frowned upon, to say the least; 3) and the fact that the Rosicrucians were also aligned with the obscurantists of religious orthodoxy, the Jesuits, and recruited members from among its ranks.

A short overview of the “esoteric transmission” from the Golden and Rosy Cross can be had here. The Golden Dawn’s grade system is identical to that of the earlier 18th century secret society, and they benefited from “the entire esoteric corpus of this essential Rosicrucian order.”

Elaborate initiation ceremonies were used to mark passage from one to another. The order met in circles (Zirkel) composed of a maximum of nine members; each circle included Rosicrucians of various rank, with the chairman (Zirkeldirektor) usually being an adeptus at least. … Several Zirkel were placed under the control of an Oberhauptdirektor. The highest officials were several Grosspriors, the Vizegeneral, the General, and the Magus, though nothing is definitely known about the mode of operation, or even the existence, of top echelons of the Rosicrucian Order (Klaus Epstein, The Genesis of German Conservatism, Princeton University Press, 1966, p. 107).

As mentioned in Illuminati Conspiracy Part Two: Sniffing out Jesuits and documented in my book Perfectibilists, “ex”-Jesuit Ignatius Franciscus Franck [Ignaz Franck] (1725-1795) was not only the persecuting hand against the Illuminati in Bavaria, but he was also the Zirkeldirektor of the Munich Golden and Rosy Cross. Franck, in a letter to his Superior (the Grossprior of the Golden and Rosy Cross of Southern Germany), brags about his successful efforts against the Illuminati – i.e., depriving them of their livelihood and taking pleasure in banishing them from the country, penniless, along with their wives and children. The letter was sent out as an official communiqué to various Zirkel, Sept. 1, 1786, with the following preface:

On where we are currently in Bavaria with regard to the Illuminati, and what course to take, we now have a report from our Director of the Circle in Munich, who plays an important role in [the affairs of] that city … God bless his tough and perilous work; we have supported him as much as possible through our advice, our actions, all kinds of correspondences, and with our fervent prayers… (Perfectibilists, p. 36).

The 18th Century Rosicrucians had established circles in Vienna, Prague, Frankfurt-am-Main, Marburg, Kassel, Hamburg, Sulzbach, Munich, Regensburg and Augsburg, among others. The latter city was also a stronghold of the Jesuits. When their order was nominally abolished in 1773, many of them took refuge in Augsburg and published pamphlets against the Freemasons, the Enlightenment and especially the Illuminati (see R.R. Palmer, The Age of Democratic Revolution: A Political History of Europe and America, 1760-1800 – II: The Struggle, Princeton University Press, 1970, pp. 452-53). Although documented membership in the Golden and Rosy Cross is fleeting and haphazard at best, the fact that the Jesuits and the Rosicrucians made Augsburg their home – both having pitted themselves against the rationalists and the Illuminati – is significant and warrants a thorough investigation.

The credulousness of those attracted to Rosicrucianism during the 18th Century is well expressed by Johann Christoph Wöllner (1732-1800), an Oberhauptdirektor at the head of an expanse of 26 circles and 200 adepts (and a friend of Ignaz Franck’s). The magisters of the eight degree, Wöllner was convinced, “had the power to hatch chickens out of hard-boiled eggs” (Christopher McIntosh, The Rosicrucians: The History, Mythology, and Rituals of an Esoteric Order, Weiser, 1998, p. 72)!

The highest adepts remained hidden from the rank and file; and the magestri and magi, in particular, were elevated to the level of demigods. “Our magi do not carry on ordinary magic,” Epstein quotes from the Golden and Rosy Cross’ statutes:

Our magic is the truly divine magic, which allows us to talk personally with God, as Moses and Isaiah did of old, or to send our messages through spirits which have been purified by the fire of God. We possess the two main secrets of Jehovah, i.e., how to create and destroy all natural matter. We can transform water into blood, as did Moses; we can turn a flourishing city into debris by the sound of trumpets, as did Joshua. We can give commands to the sun, the moon, the stars and the wind, and we can raise men from the dead as did the prophets of old (Epstein, pp. 108-9).

Needless to say, this is obviously the origin of the so-called Secret Chiefs of the Golden Dawn. The Strict Observance of the 18th Century had similar beliefs: they called their invisible masters, Unknown Superiors. And the Mahatmas and the Great White Brotherhood of Theosophy is but a continuance of the doctrine.

In the last blog post mentioned at the beginning, the Sabbatean/Frankist influence upon the Golden Dawn is fleshed out considerably. “Sincerus Renatus” sets out to prove his initial statements, that:

[…] recent research has found that the origins of the Qabalistic tradition of the Golden Dawn has strong Sabbatian connections which probably derives from the Asiatic Brethren, which in turn received its Qabalistic transmission from the peculiar version of Jacob Frank’s Sabbatian Qabalah, centered in Poland. One can easily see a development or lineage here from Isaac Luria, through Sabbatai Zevi (and his prophet Nathan of Gaza) to Jacob Frank. This “lineage”, or rather “esoteric transmission”, continues to this day through the Golden Dawn!

[…] Our Order has evidence in its archives which shows that many concepts and practices within the Golden Dawn have a strikingly Sabbatian resemblance, inherited from the German Rosicrucian movement of the 18th Century, as for example some Golden Dawn wand designs, which according to Mr. Jean-Pascal Ruggiu, was inspired by a Gold- und Rosenkreutz document which, interestingly enough – and I quote – “contains strong Polish Jewish Qabalistic influences, and especially those coming from the school of Sabbatai Zevi”.

He does spill the beans, so to speak, but stays away from precisely identifying – in operative terms – exactly what was transmitted to the Golden Dawn in regard to the controversial antinomian Sabbatian/Frankist sex rituals.

The work of Gershom Scholem and Jacob Katz has established beyond doubt that Jacob Frank’s nephew and intended successor, Moses Dobruska, was a conduit for authentic Sabbatian/Lurianic Kabbalah via the Asiatic Brethren. Yet in Du Frankisme au Jacobinisme, Scholem writes that before 1780 Dobruska had also become a regular Freemason, as had other members of various Frankist families (p. 28). And on p. 29, he mentions the Golden and Rosy Cross by name – that the Frankists, extravagant Catholic monks (who had much sympathy for the Sabbatians through extensive travel in the Orient), and the adventurers from the Golden and Rosy Cross, got along well because of their shared syncretistic tendencies.

Since we know that Frankists joined Freemasonry proper and belonged to dedicated occult groups such as the Asiatic Brethren, they probably had been initiated into the Golden and Rosy Cross as well. And if you were seriously interested in alchemy during the 18th Century, affiliation with the Rosicrucians was almost required. It is for this reason that I think it’s possible that Jacob Frank himself might have been a member of the Golden and Rosy Cross. 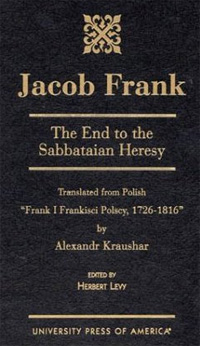 First, some tantalizing clues are found in Kraushar’s Jacob Frank: The End to the Sabbataian Heresy (University Press of America, 2001). Krausar’s book uses standard chronological methodology, and when he discusses Frank’s activities in Brunn (or Brno), Moravia, for the first time in the text we read such things as: “Franks activities involved … alchemy: successfully persuading his followers that there were certain herbs that, when spread over iron, transmuted that metal into gold; also that there was a ‘certain substance’ giving eternal life…” “Before the element of magic was used by Frank in an attempt to practice alchemy for the purpose of creating gold, the master passed for a doctor, restoring health to the sick by the use of means known only to him” (296); “…when he was feeling better, he began to think about ways to locate new sources of income, to create gold through alchemy. He reminded himself how he had toiled over alchemy with Rabbis Issachar and Mordechai…” (303); “he gathered his brothers, and encouraged them to pursue the knowledge of how to make gold … At Frank’s court, there began the preparation of ‘gold drops’ as a medication ‘for all diseases’” (304).

All this takes place while in Brno from the mid-1770s to about 1786. There’s no mention of alchemy or gold-making, before or after. And there was a Golden and Rosy Cross circle in Brno at the time, founded by Count Karl Josef von Salm-Reifferscheidt (1750-1838) at his chateau. Count von Salm was Master of the Lodge Zur aufgehenden Sonne im Orient [The Rising Sun in the Orient] of the Templar Strict Observance, and had been a representative for Austria at the Wilhelmsbad Masonic Congress in 1782.

I have not been able to uncover whether Jacob Frank had been acquainted with either Count von Salm or his circle of Rosicrucians, but the fact that Frank started speaking of alchemy and gold-making during his stay at Brno is significant and worthy of further investigation. That Frank had mentioned toiling over alchemy with Rabbis, does not discount (on the basis that he received this knowledge from them) a connection with the Golden and Rosy. After all, Scholem had specifically mentioned the Frankists and Rosicrucians as getting along well; and though Jews at the time weren’t exactly welcomed into regular Freemasonry, the Rosicrucians can be expected to have actively sought Jewish initiates, Kabbalistic Rabbis, Baal Shem and the like.

In any case, the Sabbatian elements detected in the Golden Dawn teachings probably descend from both the Golden and Rosy Cross and its Dobruska-influenced offshoot, the Asiatic Brethren. Until someone compiles a substantial and authoritative list of definite members of the Golden and Rosy Cross, the precise degree of contact between the Frankists and the Rosicrucians remains a mystery.