A Brief Encounter with Adam Weishaupt in 1804 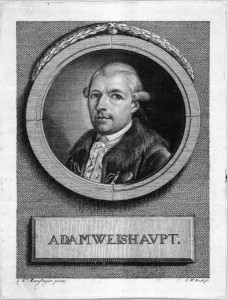 Relatively late in the research for the book Perfectibilists, I became aware of an short account from Henry Crabb Robinson, in his Diary, Reminiscences, and Correspondence, where he had gone to Gotha in 1804 and met with Adam Weishaupt. I hadn’t included this exchange in my own book (as it wasn’t readily accessible to me at the time). However, recently, Google books has scanned in a full-view copy of the diary. Here, then, is Henry Crabb Robinson’s encounter with Adam Weishaupt (in Diary, Reminiscences, and Correspondence, Vol. I, Boston: Fields, Osgood, & Co. 1869, pp. 124-6):

[…] my object in referring to this visit to Gotha is to say something of a man whose name belongs to the history of the last century, though it was raised to undue importance by the malignant exaggerations of party spirit.
During the heat of the first Revolution in France, two works appeared, one in England, by Professor Robison of Edinburgh, and the other, the more voluminous, in France, by the Abbe Barruel, with the common object of showing that the Revolution and all the horrors consequent on it were the effect of a conspiracy deliberately planned and carried out on the Continent of Europe by an Order of Infidels, who, by means of secret societies, planned to destroy all thrones, overturn all altars, and completely upset the established order of things. The society to which this scheme was ascribed had the name of The Illuminati. They were supposed to have ramifications everywhere. The Kantian philosophy was one of the instruments. Indeed, more or less, every union of men, and every variety of thought, opposed to monarchy and popery had about it the suspicion of “Illumination.” And of this tremendous evil the founder and archdeacon was Adam Weishaupt. When I found that this notorious man was leading a secluded life in Gotha, I determined to call on him. On entering his room, I remarked that he was both embarrassed and reserved, and it was not till I had introduced myself as one anxious to see him, though I knew of him only from his enemies, that he seemed willing to enter into conversation with me. On my taking leave, he even invited me to repeat my visit, and I went to him three times. He frankly told me that I was let into his house through the stupidity of a servant-girl, whom he was on the point of turning away for it; but he had forgiven her on account of the pleasure he had derived from our interviews. He said he held in abhorrence all travellers who made impertinent calls, and especially Englishmen. He would not gratify the curiosity of such men. But my candor and openness had rendered him willing to make an exception in my case. In saying this he was, perhaps, not departing from that character which his enemies ascribed to him. Indeed, as is usual in such instances, the statements made concerning him are founded in truth. The falsehood lies in the exaggeration of some parts of his history, and in the omission of others.

Weishaupt would not have denied that he was brought up among the Jesuits, or that in his opposition to them he availed himself of the resources which he acquired through his connection with them. And he did form a secret Order at a time when, especially in the South of Germany, an open expression of free opinions would have endangered liberty, and perhaps life. That the end was good according to his first intention, and that there was at all times, perhaps, a mixture of goodness in his motives, may reasonably be conceded. Many eminent men (Baron Knigge was one of the ablest) attached themselves to the Order. It has always been said that Maximilian, the first king of Bavaria, was favorable to it; nor does the history of his reign contradict the report. The Church, the courtiers, and the aristocracy were, however, too powerful for the conspirators. The society was broken up, a fierce persecution arose, and Weishaupt was happy in making his escape, and obtaining the protection of the learned Duke of Saxe-Gotha and the Duchess. When I saw him he was about fifty-six years of age, and his appearance was in no respect prepossessing; his features were coarse, his voice harsh, and his manners abrupt and awkward. But his conversation made a strong impression on my mind. He showed no great anxiety to vindicate himself against the prevailing opinion respecting him, or to dwell on those sentiments which would be most likely to gain popular favor; on the contrary, he uttered things which it requires boldness and indifference to evil report to express. Among his sayings, one was delivered with peculiar emphasis: “One of my tests of character is what a man says about principle. A weak man is always talking of acting on principle. An able man does always the right thing at the right moment, and therein he shows himself to be able.” He even went so far as to say that there are occasions when it is foolish to be just. He took a desponding view of human life, and seemed to think human society unimprovable. No wonder! He had himself failed as a reformer, and therefore thought no one else could succeed. He said, “There is but one schoolmaster whose teaching is always effectual, — Necessity. Evil flourishes till it destroys itself. So it was with Popery; so it will be with monarchy.” And he added, somewhat diffusely, that there is a constant interchange of progressive evil and partial reform. I said, I could not believe that his view was a correct one. He smiled and said, “You are quite right; if you can help it, don’t believe it.” I said, “You would not teach this to your children.” — “If I attempted it,” he answered, “I should not succeed. The young, with their good hearts, cannot believe it.” — “But old men with cold heads?” I said in a voice of interrogation. “I am sorry for it,” he said, “but it is true.”

The practical writings of Weishaupt are of value; the speculative were never esteemed. He wrote against the Kantian philosophy, but his works were not read. His “Pythagoras,” as he said, contains all the statistics of Secret Societies. But the vast extension of education since Weishaupt’s time has rendered this learning of less importance than it was even then. He is said to have been an admirer of Buonaparte. This is natural with his peculiar habit of thought. For the French character he professed great contempt, and for the English high admiration. To poetry and the fine arts he was indifferent.

A couple of things stand out. Weishaupt, while stressing that a man with character do what’s right, at the right time – hinting that such an able man alone knows it to be “right,” and is thus fit to lead – is classic Machiavelli; or, perhaps, similar to the maxims of Gracián Baltasar (both Machiavelli and Baltasar were recommended reading for Illuminati initiates; see my forth coming book). The other part of the too-few quotes from Weishaupt cited in diary, expresses something akin to fatalism, as defined in philosophy – a doctrine that Weishaupt wholeheartedly embraced during his years of exile.

Robinson’s assertion is correct that Weishaupt’s anti-Kantian philosophy wasn’t that popular. However, to his fellow popularphilosophen (among whom were more than a few Illuminati), and indeed to Kant’s disciples, Weishaupt’s broadside against Kant was formidable; and the only reason Kant hadn’t responded, was because his embargo against polemics had prevented it. Weishaupt’s three main Kantian critiques, are: Ueber die Gründe und Gewissheit der menschlichen Erkenntnis zur Prüfung der Kantschen Critik der reinen Vernunft [On the Reasons and Certainty of Human Knowledge: An Examination of Kant’s Critique of Pure Reason] (Nürnberg 1788); and Ueber die Kantischen Anschauungen und Erscheinungen [On Kantian Observations and Phenomena] (Nürnberg 1788); Zweifel über die Kantischen Begriffe von Zeit und Raum [Doubts about the Kantian Notions of Time and Space] (Nürnberg 1788).