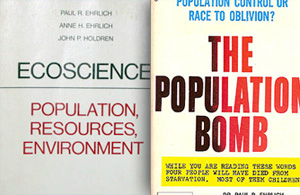 Nowadays, anyone and everyone who raises a disparaging word about the Obama Administration’s policies is immediately assigned the stigma of “alarmist,” “scaremonger,” or “paranoid.” Perhaps such stigmas are actually applicable in some cases, like Genesis Communications Network radio talk show host Alex Jones and Fox News talk show host Glenn Beck. In both of these cases, there are, no doubt, serious sanity issues involved. However, those who have familiarized themselves with the résumé of President Obama’s recently appointed Science Czar, John Holdren, have good reason to be afraid.

Before I proceed any further, allow me to dissuade readers from ascribing any sort of partisan biases to me. I am neither a Democrat nor a Republican. Foreign policy commentator Robert Kagan once observed that this false dichotomy represents “two variations of the same worldview.” The dialectical commonalities exhibited by Republicans and Democrats bear out this contention. Neither party is interested in dismantling the labyrinthine machinations of Big Government or restoring the Constitution as the supreme law of the land. Both are merely committed to the maintenance of their two-party political cartel.

Having dispelled any accusations of partisan prejudices, allow me to provide a brief overview of Holdren’s résumé. In 1977, Holdren co-authored Ecoscience with Paul and Anne Ehrlich. Of course, Paul Ehrlich was the environmental scientist who published The Population Bomb in 1968.

This hyperbolic collection of demographic doomsday prophecies foolhardily predicted, “The battle to feed humanity is over. In the 1970s, the world will undergo famines. Hundreds of millions of people are going to starve to death in spite of any crash programs embarked upon now.”

Of course, the arrival of the 70s banished such forecasts to the realm of Chicken Little eschatology. Yet, Ehrlich wasn’t done embarrassing himself. In 1980, the wannabe demographer bet University of Maryland economist Julian Simon that an impending era of scarcity would lead to rising prices among various commodities. Ehrlich bought five different metals for $1,000 on the condition that Simon would have to pay him the difference should their combined value be higher in 1990. A decade later, the combined price of the metals had actually fallen and Ehrlich had to pay Simon $576.

It comes as little surprise that Ehrlich’s prophecies never materialized. His views were heavily influenced by the 19th century Anglican clergyman Thomas Malthus. Malthus authored Essay on the Principle of Population, a treatise premised upon the spurious thesis: “Population, when unchecked, increases in a geometrical ratio. Subsistence increases only in an arithmetic ratio.” Although Malthus articulated his observations in succinct mathematical equations, the complexities of the natural order typically defy such numerical reductionism. Nevertheless, Malthus concluded that society should adopt certain social policies to prevent the human population from growing disproportionately larger than the food supply.

Malthus’ genocidal policies specifically targeted the poor. Through the promotion of hygienically unsound practices amongst impoverished populations, Malthus believed that the “undesirable elements” of the human herd could be naturally culled by various maladies. The spread of disease could be further assisted through discriminative vaccination and zoning programs. Worse still, Malthus promoted infanticide for illegitimate children, a practice that is still advocated by many bioethicists today. Peter Singer is one case in point. Ominously enough, Singer recently argued for the rationing of health care in a New York Times editorial.

Ehrlich’s prescriptions for the alleged “population bomb” were equally draconian. They included “compulsory birth regulation… (through) the addition of temporary sterilants to water supplies or staple food. Doses of the antidote would be carefully rationed by the government to produce the desired family size.”

Given his failed predictions, one would think that people would have stopped listening to Ehrlich a long time ago. Unfortunately, fools abound, as is evidenced by Obama’s appointment of Holdren to the position of Science Czar. Holdren merely reiterates Ehrlich’s core normative contention: “Population control is the only answer.”

In fact, on page 786 of Ecoscience, Holdren writes, “Indeed, it has been concluded that compulsory population-control laws, even including laws requiring compulsory abortion, could be sustained under the existing Constitution if the population crisis became sufficiently severe to endanger the society.”

On pages 786–87, Holdren endorses “sterilizing women after their second or third child” and administering a “long-term sterilizing capsule that could be implanted under the skin” for “coercive fertility control.”

On pages 787-88, Holdren reintroduces the draconian notion of adding sterilants to drinking water on the condition that such a substance “must have no effect on members of the opposite sex, children, old people, pets, or livestock.” How humanitarian. At least Holdren made the provision for some exemptions, like chickens, cows, pigs, and other barnyard buddies. That Holdren includes the elderly and children in the same category as livestock bespeaks a rather low valuation of human life.

As is the case with most proponents of population control, Holdren’s recommendations invariably assume a eugenical character. On page 838, he states, “If some individuals contribute to general social deterioration by overproducing children, and if the need is compelling, they can be required by law to exercise reproductive responsibility…”

It comes as little surprise that, at a July 30 hearing of the Senate Commerce Committee, Senator Jay Rockefeller said, “Dr. Holdren, I don’t want to embarrass you but I sometimes refer to you as walking on water.”

Of course, the Senator is a scion of the Rockefeller dynasty, a lineage of consummate American oligarchs who have harbored a historical flirtation with eugenics. The Rockefeller Foundation, which was formed by John D. Rockefeller in 1909, created and directed the Kaiser Wilhelm Institute for Anthropology, Eugenics and Human Heredity. The chief executive of this institution was none other than Swiss psychiatrist Ernst Rudin, Hitler’s director of genetic sterilization and a founder of the Nazi Society for Racial Hygiene.

Rockefeller’s messianic portrayal of Holdren underscores the power elite’s disturbing preoccupation with population control. The unsettling rationale for this preoccupation comes into clearer focus when one considers a study conducted by the Royal Commission on Population in 1944. Formed by King George VI to examine the declining fertility rates in the British Commonwealth, the Commission observed that the demographic implosion advanced “fastest among the higher occupational categories.” Apparently, a distinct fertility differential was making itself evident along socioeconomic demarcations. According to the Commission’s official report, it was the aristocracy that was demographically receding.

This fertility differential was attributable to the oligarchs’ tradition of “deliberate family limitation.” The demographic costs of such practices were becoming evident. Not surprisingly, Malthusianism and its theoretical correlative, Darwinism, were promoted by scientific minds within elite quarters. The theories of Malthusianism and Darwinism were formulated according to the sociological considerations of the ruling elite. Out of these two pseudo-scientific theories would emerge the socially and politically expedient concept of eugenical population control.

Simply stated, population control is camouflaged class warfare. In truth, the oligarchs are not concerned with carrying capacity. Ultimately, they are concerned with the capacity of their control. For the adherents of the gospel of elitism, a Malthusian like Holdren is, indeed, a messiah.