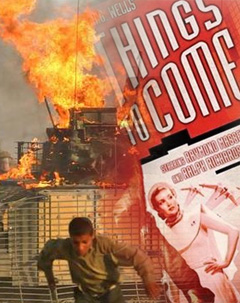 Some news pieces prove that those in power have absolutely no interest in the truth. One such story was carried in the July 1, 2008 Washington Post. The story concerned a former CIA operative who claims that the Agency ignored evidence that he had presented showing that Iran had ceased work on a nuclear weapon in 2003 (Warrick, no pagination). According to a lawsuit filed by the operative in 2004, the CIA fired him when he attempted to file reports that contradicted the position held by the Administration and the Agency concerning weapons of mass destruction in the Middle East (no pagination). The operative’s lawyer, Roy Krieger, also stated that the operative was ordered by his superiors on five occasions to either fail to file reports or falsify reports concerning WMDs in the Near East (no pagination).

While the operative’s assertions sound like something straight out of the 2005 geopolitical thriller film Syriana, they are supported by the 2007 National Intelligence Estimate (NIE). The NIE, entitled “Iran: Nuclear Intentions and Capabilities,” states Iran froze its efforts to develop nuclear weapons in Fall 2003 (no pagination). Furthermore, the NIE claims that the program remained frozen right up until the middle of 2007 (no pagination). The NIE attempts to keep the invasion option on the table by stating that “Iran probably would be technically capable of producing enough HEU [highly enriched uranium] for a weapon sometime during the 2010-2015 time frame” (no pagination). Doubtless, all of the saber-rattling on the part of the neoconservative brain trust surrounding the President has caused Tehran to resume its efforts to create a nuclear bomb. Still, the document’s finding seriously hurt the contention that Iran must be invaded to prevent the proliferation of WMDs in the Middle East.

The CIA operative’s case adds to a growing body of evidence that certain factions of the power elite, in particular the neoconservative faction, desire an unnecessary war with Iran.. It’s obvious from the numerous examples of the politicization of intelligence that people in high places want to start dropping bombs under the pretext of preventing Iran from becoming a regional superpower. Why are the drums of war beating louder and louder? The answer may lie with an early 20th century science fiction writer and a city in southern Iraq.

In his book The Shape of Things to Come, H.G. Wells forecasted a global conference in the southern Iraqi city of Basra that would lead to the birth of a world government (no pagination). Wells was not simply drawing from his imagination when he wrote about this event. The writer had frequented elitist circles and belonged to at least two elite combines, the Coefficients Club and the Fabian Society. Because Wells inhabited this milieu, he was privy to many of the plans of the power elite. The Basra conference could very well be a real future event that Wells chose to share in a fictional context. If that is the case, then Basra could be considered the Bethlehem of the New World Order.

But all is not well in Bethlehem.

The greatest obstacle to conducting the conference predicted by Wells is the Iranian presence in southern Iraq in general and Basra in particular. The most notorious agent of Iran in southern Iraq today is Shi’a militia leader Muqtada al-Sadr. According to senior Bush administration officials, al-Sadr fled to Iran prior to the Iraqi-Coalition security crackdown known as Operation Imposing Law (“U.S.: Radical cleric al-sadr in Iran,” no pagination). In late summer 2007, al-Sadr’s militia, the Mahdi Army, besieged the U.K. forces in Basra with a series of mortar and rocket attacks conducted from the Uti Triangle, a flat zone combining open wasteland, marsh and clustered buildings (Loyd, no pagination). With training and equipment from Iran, militiamen had transformed Basra from a model for post invasion Iraq into, in the words of the Times Online’s Anthony Loyd, “a logistical nightmare where even the simplest operation can turn deadly and soldiers frequently have to fight their way home” (no pagination). The Mahdi Army and their allied militiamen gained complete control over Basra on September 3 when the British soldier were withdrawn from Basra Palace and moved back to the airport (“British Troops Complete Withdrawal from Basra Base,” no pagination).

Basra was almost totally in the grip of Iran and its allied Shi’a militias. During a conversation with an American contractor in Baghdad, former CIA field officer Robert Baer was told that the Iranian toman had replaced the Iraqi dinar as the currency in Basra (no pagination). The contractor further stated that he had to pay 40 percent surcharge to Shi’a militias and Iraqi police who had aligned themselves with the Iranian Islamic Revolutionary Guard Corps (IRGC) (no pagination).

Charge of the Knights

The battle to reclaim the New World Order’s Bethlehem began on March 25, 2008 when Iraqi Prime Minister Nouri Maliki vowed to “re-impose law” (“Iraq forces battle Basra militias,” no pagination). On March 26, the BBC reported that a fierce offensive employing up to 15,000 Iraqi troops was being conducted against Shi’a militias in Basra, with the focus being on strongholds of the Mahdi Army (no pagination). Curiously, the operation was dubbed Saulat al-Fursan, or the Charge of the Knights (no pagination). Was this a reference to the Knights Templar, the fierce Western military order that helped defeat Saladin’s army in A.D. 1177? It is interesting to note that Freemasonry, the secretive organization that claims ancestral ties to the Knights Templar, is credited with establishing much of the philosophical foundation of the New World Order. Whatever the case may be, one thing is clear: the militias’ responded with an archetypal rage.

Fighting spread to other cities in Iraq, including Baghdad’s Sadr City (no pagination). Intra-Shi’a violence even broke out with the Mahdi Army clashing with Shi’a rivals (no pagination). Fighting did not cease until March 30, when al-Sadr ordered his followers to cease fighting (“Iraq’s Sadr orders armed followers off the streets,” no pagination). The outcome of the offensive was indecisive, with no clear victor rising from the conflict. However, lines had been drawn for the conflict that will follow. Ryan Crocker, the U.S. ambassador to Iraq, accused Iran of engaging in a proxy war with the Iranian Revolutionary Guard Corp. directing Shi’a militia attacks against American and Iraqi targets (Cooper, no pagination). For Basra to be secured, Iran may have to be invaded. Then, after further carnage and bloodshed, Wells’ prophecy will be fulfilled and the New World Order will have its Bethlehem.

Imperial overstretch and economic meltdown are making war with Iran a hard sell to the American people. What would it take to get the hate out right now with 7 percent unemployment and a military suffering from severe combat fatigue? For at least Cheney and his neocon allies, the answer may be a false flag operation. During a July 2008 Campus Progress journalism conference, Pulitzer-Prize winning journalist Seymour Hersh revealed that during a meeting in Cheney’s office, a plan was considered that would call for dressing Navy Seals up as Iranians, placing them on fake Iranian PT boats, and then having them get into a shoot-out with American servicemen in the Strait of Hormuz (“To Provoke War, Cheney Considered Proposal to Dress Up Navy Seals as Iranians and Shoot at Them,” no pagination).

If such a false flag operation were to ever be conducted, would the American public actually fall for it? All of the available evidence suggests that Iran has not been involved in terrorism since 1996. If they really wanted a war, the Iranians would have fired missiles at Tel Aviv a long time ago. While it is true that Iran views itself as a revived Persian Empire and has imperial aspirations, they would rather not establish their hegemony through military means. All of these factors must be taken into consideration by the American people if the government comes asking for more blood.