The Political Cartel Of Republicrats and Democrats 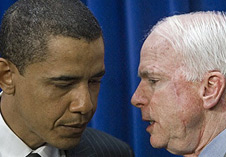 With the presidential elections steadily approaching, a question is being asked with increasing frequency: Who are you voting for? Personally, this questions aggravates me. Why? Because it is framed within a distinctly Hegelian framework. This framework consists of the confining dialectics of left vs. right, liberal vs. conservative, and, of course, Democrat vs. Republican. The latter of these dialectics is, for me, the most frustrating. Why? Because there’s no real difference between Republicans and Democrats.

Whenever the religious adherent of partisan affiliations attempts to “convert” me to their creed, I direct him or her to a quote from an obscure book entitled Tragedy and Hope. In this book, Georgetown University Professor Carroll Quigley writes, “The argument that the two parties should represent opposed ideals and policies, one, perhaps of the Right and the other of the Left, is a foolish idea. Instead the two parties should be almost identical, so that the American people can ‘throw the rascals out’ at any election without leading to any profound or extensive shifts in policy…It should be able to replace it, every four years if necessary, by the other party, which … will still pursue with new vigor, approximately the same basic policies.”

In truth, the purpose of a two party system is the maintenance of a political cartel. Within such a framework, viable alternatives are overlooked and the same logically bankrupt status quo remains enshrined. To qualify this contention, I will briefly examine one major issue that occupies the mind of the voter: the war. To be sure, this is not the only point of convergence for the Democrats and Republicans, but it is one of the most transparently fraudulent dichotomies on the political landscape. The dominant perception holds that Republicans are “hawks” while Democrats are “doves.” However, history does not bear out this dualistic portrait.

It was Republican President William Taft who endeavored to keep America out of unnecessary and costly wars. Now, under the sway of Jacobin-esque neoconservative warmongers, the Republican Party supports militaristic campaigns abroad and a meddlesome interventionist foreign policy. A natural correlative of this ongoing war has been the expansion of an already burgeoning government. Gee, aren’t Republicans supposed to oppose Big Government?

Look for more of the same with a McCain presidency. John McCain has candidly stated that the so-called “War on Terror” could last a hundred years. This statement carries with it some truly Orwellian implications. Those who have read 1984 will recall the centrality of perpetual war to the maintenance of a police state. In light of the unprecedented infringements on civil liberties facilitated by the Patriot Act, it would appear that dystopian fiction is becoming an ominous reality. Historically, external threats have provided an expedient pretext for the dismantling of individual freedoms.

This contention was eloquently synopsized by James Madison in a letter to Thomas Jefferson. In that letter, Madison wrote, “Perhaps it is a universal truth that the loss of liberty at home is to be charged against provisions against danger, real or pretended from abroad.”

Meanwhile, the Democrats are no more devoted to preventing needless wars than the Republicans. Howard Dean supported the Clinton Administration’s military intervention in Bosnia, which represented a blatant violation of the country’s national sovereignty. Worse still, Dean advocated further unilateral intervention because he was dissatisfied with the multilateral action taken against Bosnia. Ironically, the same political Left decried America’s unilateral initiation of military action against Afghanistan and Iraq after September 11. Oh, yes, and lest we forget, Hillary Clinton voted for the war in Iraq. Now, this Democratic presidential candidate decries the war in Iraq as though she had had nothing to do with it. Hmmm. Methinks such protestations are just a little bit disingenuous, especially when Hillary vows to destroy Iran if it should go to war with Israel.

And, no, Barack Obama will not bring the troops home. To be sure, Obama has promised a lot of things, but America’s withdrawal from Iraq is not one of them. In fact, Obama has pledged to maintain a military presence in Mesopotamia to prevent al-Qaeda from establishing a foothold there. Behind Obama’s messianic facade is the same imperial hubris endemic to the Republican Party.

Such hypocrisy is nothing new. During his presidential debate with George W. Bush, Kerry chastised the Commander-in-Chief for the quagmire of Iraq. Simultaneously, he admonished audiences about the supposed threat of Syria. Evidently, the antiwar mantras of the Democrats amount to little more than empty rhetoric. They are simply more selective about who they rattle their spears at. One must wonder if the political Left would have objected to the war in Iraq if it had been initiated multilaterally by the United Nations instead of the United States. For some inexplicable reason, in the Leftist mind, war attains a euphemistic veneer when its combatants are adorned with blue helmets and armbands.

In a recent article, Robert Kagan correctly observed that “In 2008, as in almost every election of the past century, American voters will choose between two variations of the same worldview.”

What is that worldview? The answer is sociopolitical Utopianism. Both parties are committed to tangibly enacting their anthropocentric vision of “heaven on earth.” War represents one point of convergence between the two because, from their Enlightenment universalist perspective, war is an instrument for the exportation of democratism. Many of those Democrats and Republicans who don’t subscribe to this worldview attach themselves to those that do for purely pragmatic purposes. In fact, many Democrats and Republicans even share membership in organizations devoted to dismantling national sovereignty and amalgamating America in some form of global governance (e.g., the Council on Foreign Relations and the Trilateral Commission). Of course, they either forget or ignore all those who stand to lose from globalization. Besides, you and I are just uneducated citizens who don’t know what’s good for us. This paradigm represents the nadir of Utopian fanaticism.

So, who should America vote for in 2008? Here’s an idea… someone who will restore the Constitution as the supreme law of the land. What a concept! Such a lofty mandate is conspicuously absent from the party platforms of both the Republicrats and the Democans. Ultimately, the choice is not about left or right, but right and wrong.