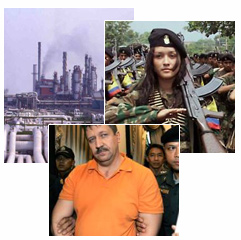 It’s a move that is causing fear among the left in Mexico. Mexican president Felipe Calderon intends to present an energy reform bill to the Mexican congress that would allow private investment in Pemex, Mexico’s state-owned oil monopoly (Grillo, no pagination). Calderon claims foreign oil companies can save Pemex from underinvestment and mismanagement by increasing Mexico’s technological and operational capacity, thus allowing the nation to tap its deep-water reserves. According to Calderon, if foreigners are not brought in, Mexico will not be able to tap its deep-water reserves and the nation will be importing petroleum in nine years. Critics of Calderon’s plan include 2006 presidential candidate Andres Manuel Lopez Obrador and Rep. Alejandro Sanchez of the leftist Democratic Revolution Party. Obrador and Sanchez fear foreign investment will lead to a predatory form of privatization and Mexicans will lose control of their own oil industry. But the dangers related to foreign incursions into Mexico’s oil industry go deeper than the debate between proponents of nationalization and privatization. The oil industry and the intelligence community have always gone hand in hand. Pemex is certainly no exception.

In 1960, George H.W. Bush secretly formed a partnership between his Zapata-Offshore Oil Company and Permargo, a Mexican drilling-equipment company that was known as Perforaciones Marinas del Golfe at the time (Trento 17). Bush’s main partner at Permargo was Jorge Diaz Serrano, a Mexican national (17-18). Both Bush and Serrano were CIA assets at the time. Bush had placed Zapata-Offshore at the CIA’s disposal, allowing the Agency to use the company as a conduit to place counterintelligence people in the Caribbean (17). Serrano had assisted the CIA with the logistical aspects of its anti-Castro operations (18). Through Bush and Serrano, the CIA gained control of the presidency of Lopez Portillo and successfully infiltrated Pemex (20). Portillo became president of Mexico in 1976, the same year Bush became the director of the CIA (20). Bush’s business partner, Diaz Serrano, was Portillo’s most powerful aide (20). Portillo went on to make Serrano head of Pemex (20-21). In 1983, Diaz was convicted of defrauding the Mexican government out of $58 million and was sentenced to ten years in prison (21). With the introduction of foreign involvement in Mexico’s oil industry, Pemex might be used as a cover for intelligence operations once again. But who would be the targets of such operations?

Three Latin American countries have angered Western factions of the power elite as of late: Ecuador, Venezuela, and Nicaragua. In April 2007, the World Bank was given its “rejection slip” by Ecuadorean President Rafael Correa when the bank’s representative to Ecuador, Eduardo Somensatto, was told to leave the country immediately (Behar, no pagination). In 2005, when Correa was economic minister, the World Bank withheld $100 million credit because Ecuador had passed a new law governing oil funds that the bank disagreed with. This move convinced Correa that the World Bank was in the business of economic blackmail and motivated him, as president, to do away with Ecuador’s reliance on the World Bank.

Venezuela’ President Hugo Chavez also voiced a desire to pull his nation out of the IMF and the World Bank. Venezuela paid off its debts to the World Bank five years ahead of schedule and paid off its debt to the IMF in 1999. In 2006, the IMF’s offices in Venezuela were closed. Chavez and Correa are certainly not boy scouts, but they correctly identified the IMF and World Bank as tools of economic warfare and social Darwinism. Oligarchs in the West are not at all happy with the withdrawal of Ecuador and Venezuela from their system of economic control.

Nicaragua and Venezuela have also become a major obstacle to plans that Western factions of the power elite have to invade Iran. Iran and Venezuela have entered into a partnership with Nicaraguan President Daniel Ortega (Bensman, no pagination). Iran and Venezuela plan to finance the construction of a deep-water port at Nicaragua’s Monkey Point. Iran has also set up an embassy in Nicaragua. Should an invasion of Iran take place, Iran could use Nicaragua as a staging ground for attacks against the United States. Revolutionary Guard operatives and Hezbollah terrorists are already present in Latin America, and they could be deployed from Nicaragua should the shooting start.

Nicaragua’s President Ortega may have also displeased Western factions of the power elite by taking a pro-life stance concerning abortion. When Ortega was president back in the 1980s, he was very much in favor of abortion rights (“Nicaragua brings in abortion ban,” no pagination). Ortega has since had a change of heart and has adopted the Catholic Church’s anti-abortion stance and abortion is illegal in Nicaragua. This move flies right in the face of the power elite’s agenda of depopulation and eugenical regimentation.

None of these countries are lily white. The picture of Chavez, Correa, and Ortega as populist heroes is one that has been painted by left-wing romantics with no grip on reality. However, these countries have become a severe threat to Western factions of the global oligarchical establishment. The effort to create a New World Order has never been monolithic. Ecuador, Venezuela, and Nicaragua now have a chip in the big game. They have become competitors who refuse to be sidelined and refuse to be subordinates in the emerging world government. They are now targets.

The Revolutionary Armed Forces of Columbia, or FARC, could provide the pretext for both covert and overt moves made in Latin America. Initially, Western factions of the power elite sought an alliance with FARC. On June 26, 1999, Reuters news service reported that Richard Grasso, the head of the New York Stock Exchange, flew into a demilitarized region of Columbia’s southern jungle and savanna and held face-to-face talks with members of general secretariat of FARC (“NYSE Chief Meets Top Colombia Rebel Leader,” no pagination). Grasso discussed “foreign investment and the role of U.S. businesses in Colombia” with the representatives of FARC’s high command. It didn’t bother the Western oligarchs in the least that FARC is involved in narcotics trafficking and kidnapping or that the group is on the State Department’s list of Foreign Terrorist Organizations. But the FARC declined Grasso’s offers to investment their money in Wall Street, so now its open season on the Colombian rebels.

Engaging the FARC militarily would certainly draw the attention of Ecuador, Venezuela, and Nicaragua. All three countries are sympathetic towards the revolutionary guerrilla organization. Venezuela’s Hugo Chavez has refused to join Colombia, the United States, and the European Union in classifying the FARC as a terrorist group (“Chavez proposal about the FARC creates deep analysis in Mexican press,” no pagination). When Raul Reyes, considered to be the number two man in the FARC’s secretariat, was killed by a Colombian military operation inside Ecuador, President Rafael Correa referred to the Colombian raid as a “massacre” and withdrew Ecuador’s ambassador in Bogota, Colombia (“Ecuador pulls diplomat from Bogota,” no pagination). When Chavez learned of the Reyes killing, he placed 10 battalions of Venezuelan troops on the Colombian border and closed Venezuela’s embassy in Colombia. Nicaraguan President Daniel Ortega also condemned the killing of Reyes (“Nicaragua’s Ortega condemns FARC commander killing,” no pagination). Ortega has even referred to FARC chief Manuel Marulanda as a “dear brother”.

If the United States were to move against the FARC, it could very well ignite conflict of both an overt and covert nature with Venezuela, Ecuador, and Nicaragua. Movement in that direction may have already begun. Colombian President Alvaro Uribe’s campaign against the FARC is backed by the United States. The United States might lend a covert and overt assist to Uribe somewhere not too far down the line. If that were to happen, Pemex would be an ideal cover for covert operations against the FARC, Colombia, Ecuador, and Nicaragua. Would covert and overt war against the FARC and its state sponsors be in the best interests of the American people? FARC and the states supporting it are certainly no angels, but it seems that Western factions of the power elite merely wish to remove some pesky obstacles to establishing their position as the dominant force in the New World Order. A war would simply support that agenda.

If America began making moves militarily in Latin America, the FARC would prove to be a formidable foe for American soldiers. Who is responsible for building the Colombian rebels up? Russian arms dealer Viktor Bout is supposed to have supplied the FARC with 10,000 weapons between December 1998 and April 1999 (Casey, no pagination). The United States is currently trying to extradite Bout from Thailand so he can be tried for attempting to sell millions of dollars of weapons to FARC. The sale would have included 100 surface-to-air missiles and armor-piercing rockets. Bout did business with a rogue gallery that included the Taliban and al-Qaida.

But what many people don’t know is that there is a considerable amount of evidence that ties Bout to the power elite. In 2004, it was discovered that the Pentagon, the Coalition Provisional Authority in Iraq, the Air Force, and the Army Corps of Engineers were permitting U.S. contractors in Iraq to do business with Bout’s air cargo companies in spite of the fact that the Treasury Department labeled Bout an arms dealer and had frozen his assets (Braun, no pagination). One of the firms doing business with Bout’s network was none other than Kellogg Brown and Root (KBR), which was, at the time, a subsidiary of the multinational corporation formerly headed by Vice President Dick Cheney known as Halliburton. Air Bas, a company tied to Bout’s aviation empire flew supplies into Iraq for KBR at least four times in October of 2004. Halliburton moved its corporate headquarters to Dubai at a time when Dubai was Bout’s base of operations (Grigg, no pagination). The United Nations also did business with Viktor Bout, using his planes to transport troops into Africa and East Timor.

Why was Viktor Bout allowed to operate for so long? Why was Bout doing business with those within the hallowed halls of officialdom, those who we would consider to be legitimate? It seems that Bout’s job was to create the enemies that the power elite and its prostitutes in government need to act as a pretext for war. FARC is one of those enemies. The disease and the cure are created in the same lab.