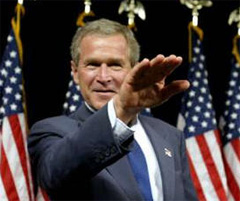 Benito Mussolini said, “Fascism should more appropriately be called Corporatism because it is a merger of state and corporate power.”

This model of economic fascism was adopted by Germany and Italy in the 1930s. And, I submit to you that such a marriage between the state and corporate power has taken place here in the United States.

Does this sound like a baseless contention? Allow me to substantiate it with history.

A form of Corporatism began to infect our constitutional republic in the 1930s. It propagated itself under the euphemistic appellation of “planned capitalism” and was hailed as a desirable inevitability. In 1936, Lawrence Dennis published The Coming American Fascism, a polemic contending that America’s adoption of stringent public regulation and the enshrinement of corporate power would invigorate “national spirit.” However, Dennis believed that economic fascism had a major obstacle to overcome.

Dennis wrote, “It cannot be repeated too often that what prevents adequate public regulation is liberal norms of law or constitutional guarantees of private rights.”

Dennis proffered a chronocentric portrait of America’s traditional republican model of government, caricaturing it as an outmoded “18th-century Americanism” that would eventually be supplanted by “enterprises of public welfare and social control” (i.e., economic fascism).

Further expounding on the prerequisites for the Corporatist restructuring of America, Dennis wrote, “(Economic fascism) does not accept the liberal dogmas as to the sovereignty of the consumer or trader in the free market… Least of all does it consider that market freedom, and the opportunity to make competitive profits, are rights of the individual. Such decisions should be made by a ‘dominant class,’ an ‘elite.'”

The deconstruction of America’s “liberal dogmas” would be facilitated by the Great Depression and Franklin D. Roosevelt’s New Deal. Contending that “government restrictions henceforth must be accepted not to hamper individualism but to protect it,” FDR successfully installed his National Recovery Administration. Roosevelt’s argument was laced with vintage Orwellian semiotics. In essence, FDR was presenting statism as individualism’s savior. Given statism’s mandate for the subordination of the individual to the collective, this contention would have appeared to have been hopelessly flawed. So, what was Roosevelt actually proposing?

By depicting the state as the individual’s ersatz savior, Roosevelt was actually empowering the very antithesis of individualism. Roosevelt’s doublespeak worked and America was set on the path to statism, which is a precursor to Corporatism. The National Recovery Administration would be deemed unconstitutional later, but not before it left its indelible mark on America’s federal government. In turn, the burgeoning federal government has gradually wedded itself to corporate interests that are unelected and unaccountable to the citizenry.

According to a recent CNN poll, 69 percent of Americans believed that the Founding Fathers would be disappointed with the state of America. Is there any wonder why? The system they fought hard to establish is swiftly being supplanted by the prerogatives of corporate reign.