The Swastika Hidden Behind the Crescent 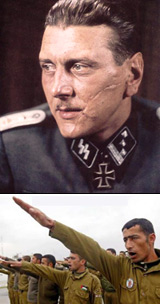 Recently, we were contacted by a reader who wanted to correct what he felt was an error in our article “The Reemerging Swastika.” This reader sent us a document that claimed Youssef Nada was born in 1931 (“Extra Vol. 135, Number 5,” no pagination). If true, this would have made Nada only 14 when he was supposed to have helped the Grand Mufti escape from Germany in 1945. So there is a possibility that Nada does not connect the postwar Nazi International to the radical Islamists. However, we have not entirely abandoned the contention that Nada was a member of Nazi military intelligence just yet. Egyptian intelligence services’ sources have claimed that Nada was working for the Abwehr under Admiral Canaris (Labeviere 140-41). Intelligence sources do not fall into the same category as members of the Tinfoil Hat Club. They deserve a whole lot more credence. So it is still possible that Nada was connected to the Nazi military intelligence.

We certainly do not mind when a reader lends an assist by pointing out an error that slipped through the cracks. However, the whole thrust of the e-mail seemed to be that there is no connection between Nazism and radical Islamists. The evidence of connections between the Nazis and the radical Islamists is voluminous. The marriage between these two beasts came about courtesy of the Central Intelligence Agency (CIA). In 1952, the CIA supported a coup against the ruler of Egypt, King Farouk. Egyptian army General Mohammed Naguib was chosen by the Agency to head the government and Gamal Abdel Nasser became the country’s shadow dictator. The CIA wanted to maintain a U.S. influence in Egypt’s political affairs and turned to three Nazis to accomplish that goal: Reinhard Gehlen, the Nazis’ primary intelligence-gatherer on the Eastern Front, Otto Skorzeny, Hitler’s infamous commando, and Hjalmar Horace Greeley Schacht, Hitler’s finance minister. Egypt, like other Arab countries, were quick to accept help from the Nazis. According to Gehlen’s memoirs: “We found Arab countries particularly willing to embrace Germans with an ostensibly ‘Nazi’ past.” Skorzeny headed off to Egypt to act as Naguib’s military advisor (Infield 205-06).

However, Skorzeny went to Egypt to do more than maintain a U.S. influence over the Egyptian government. Under CIA sponsorship, Skorzeny began promoting fascism in the Middle East. Glenn Infield elaborates:

. . . if there were any doubts that Skorzeny’s allegiance to the United States was of an opportunist nature and temporary, they were dispelled by his actions in Egypt and the Mideast. Even his deep hatred of the Soviets was forgotten when it interfered with his personal ambitions. Egypt presented Skorzeny the opportunity to promote fascism; to establish a Nazi clique whose influence would be felt by the West German government to restore German prestige in the Mideast, and to become a wealthy man. He didn’t allow the opportunity to pass . . . (205)

Working with the Egyptian government also gave the Nazis an opportunity to spar with their enemies: the Jews and the Jewish nation of Israel. In 1951, the Judische Rundschau warned: “As for Skorzeny’s anti-Semitic and fascist propensities, this is undoubtedly true. Skorzeny readily admits his strong anti-Semitism.” Reinhard Gehlen was also strongly opposed to Israel. Glenn Infield provides evidence of Gehlen’s hatred of Israel and favoritism of Arab nations:

Gehlen, too, had reservations about the relationship between the new West German government and Israel. “I have always regarded it as something of a tragedy that West Germany was inevitably dragged into an alliance with the state of Israel against the Arab countries,” he stated in his memoirs. “I always regarded their [Arabs] traditional friendship for Germany as of immense value for our national reconstruction. And at the request of Allen Dulles and the CIA, we at Pullach did our best to inject life and expertise into the Egyptian secret service, supplying them with the former SS officers I have mentioned.” (207)

Naguib seemed to be strongly pro-Nazi. This pro-Nazi stance came out in Naguib’s public statements:

“I want you to believe me when I say that I have not changed the great admiration I have for the Germans. Their efficiency, their extraordinary gifts as scientists and technicians, and their loyalty are quite unique. I have been noticing all these qualities in recent times, watching the work of the German officers and experts in my army.” (207)

“Hitler is the man of my life. The German dictator had been an ideal leader who dedicated his life to the realization of his noble ambition. He never lived for himself but for Germany and the German people. I have always wished to live like him.” (207)

Skorzeny began bringing diehard Nazis to Egypt to help him with the promotion of fascism. This group of Nazis began to transform the Egyptian army and security forces along Nazi lines. Infield describes this rogues gallery:

Skorzeny felt at ease among Egyptian officials with this attitude. His first task was to organize a staff of former SS and Wehrmacht officers to train the Egyptian army and security forces. He selected carefully, making certain that each officer he brought to Egypt was a diehard Nazi, an expert military tactician, and was anti-Semitic. Among those recruited by Skorzeny were SS General Oskar Dirlewanger, who had commanded a brigade composed of poachers, criminals, and men under the sentence of court-martial during the Warsaw ghetto uprising and whose actions against the Jews had earned him the nickname “Butcher of War saw”; SS Colonel Adolf Eichmann, the officer Himmler charged with the destruction of millions of Jews and who later would be kidnapped from Argentina by the Israeli secret service and smuggled back to Israel to stand trial; SS General Wilhelm Farmbacher; Panzer General Oskar Munzel; Leopold Gleim, former chief of Hitler’s personal guard and Gestapo security chief of German-occupied Poland; and Joachim Daemling, former chief of the Gestapo in Dusseldorf. To handle medical problems, Skorzeny recruited Dr. Hans Eisele, who had been chief medical officer at Buchenwald concentration camp, and Heinrich Willerman, former medical director at Dachau. (207-08)

Eventually, U.S. officials became suspicious about all the Nazis turning up in Egypt (208-09). However, by then it was too late. The Nazis had already planted the seeds of hate in the Middle East. When those seeds sprouted up, they became part of the terrorist threat that we face today.