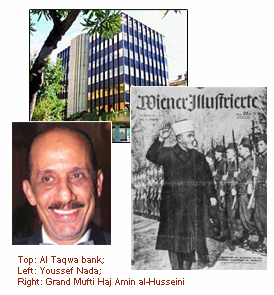 During his January 2003 State of the Union speech, Bush identified “Hitlerism” as a criminal ideology. While his statement was accurate, the President was being insincere. His insincerity was clearly displayed on June 20, 2007 when the State Department’s Bureau of Intelligence and Research hosted a meeting with intelligence community representatives to talk about the possibility of forging an official relationship with the Muslim Brotherhood (Lake, no pagination). This was just one of many moves on the part of the Bush administration to open up diplomatic channels with the Brotherhood. The Muslim Brotherhood is not just a collection of radical Islamists. They are intimately tied to the post-War Nazi International. This connection can be found through an examination of the Brotherhood’s bank, known as Al Taqwa.

Huber has stated that the Nazis and radical Islamists are fighting to achieve the same objectives (no pagination). Authorities who have conducted a probe on the Al-Taqwa bank believe that its resources are allocated to support international terrorists, Bin Laden being one of the recipients (no pagination). Two Bin Laden family members were actually Al Taqwa bank shareholders (Hosenball, no pagination). For the Nazi, Osama bin Laden is not merely another mad bomb-thrower. Instead, he is actually an integral part of the Nazis’ post-War agenda. According to Ahmed Huber’s account:

a group of aging SS officers and members of Hitler’s personal guard who meet every few weeks in the German state of Bavaria for beer and conversation recently bestowed the title “honorary Prussian” on bin Laden. They praised his “valiant fight” against the United States, Huber said.

One of the members called Huber after the meeting to tell him that henceforth they had decided to call the al Qaeda leader “Herr von Laden,” Huber said. (Finn, no pagination).

Through Al Taqwa bank’s financing of international terrorism, the Muslim Brotherhood are seeing to it that the Nazi postwar objectives are satisfied. After all, terrorism leads to increased police state powers, which correspond with the historical agenda of Nazism. By seeking diplomatic relations with the Muslim Brotherhood, Bush’s earlier condemnation of “Hitlerism” becomes disingenuous and cynical. Given the Bush family’s flirtation with fascism, this should come as little surprise.