Compromised at the Top 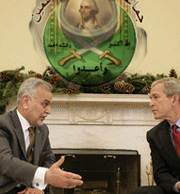 HHow do you conduct an imperialist campaign abroad and erect a police state domestically? You launch a phony war on terrorism to act as the pretext. How do you prevent the phony war on terrorism from becoming a genuine war on terrorism? You make sure you have a thoroughly compromised individual acting as your Commander in chief. On June 20, 2007, the Bush administration made moves demonstrating that the President is just such a compromised individual. The Bureau of Intelligence and Research at the State Department hosted a meeting with other intelligence community representatives to discuss the opening of “more formal channels” to the Muslim Brotherhood (Lake, no pagination). This is just the latest in a series of moves made by the administration to reach out to the Muslim Brotherhood (known in Arabic as Ikhwan) (no pagination). One of the Brotherhood supporters at the June 20 meeting was Robert Leiken (no pagination). Robert Leiken, a scholar at the Nixon Center, was commissioned by the National Intelligence Council to put together a paper on the history of the Muslim Brotherhood earlier in 2007 (no pagination). According to administration officials, Leiken’s paper to the National Intelligence Council drew the attention of Secretary of State Condoleezza Rice and senior members of the National Security Council (no pagination).

initiated the delivery of Syrian intelligence to the United States. The Syrians had compiled hundreds of files on Al Qaeda, including dossiers on the men who participated – and others who wanted to participate – in the September 11th attacks. Syria also penetrated Al Qaeda cells throughout the Middle East and in Arab exile communities throughout Europe. That data began flowing to C.I.A. and F.B.I. operatives. (Hersh, no pagination)

In 1982, after years of increasingly violent terrorist attacks throughout Syria, Hafez Assad ordered a massive military assault on the Muslim Brotherhood in the northern city of Hama. He saw the group as a threat to his control of Syria, and his forces, showing little mercy, killed at least five thousand people, many of them civilians, in a month long battle that left the city in ruins. (No pagination)

Instead of confronting the Muslim Brotherhood, the United States government seems to have actually collaborated with them. Former CIA official Graham E. Fuller’s words seem to sum up the government’s position:

“It is the preeminent movement in the Muslim world,” said Graham E. Fuller, a former CIA official specializing in the Middle East. “It’s something we can work with.” Demonizing the Brotherhood “would be foolhardy in the extreme,” he warned. (Mintz and Farah, no pagination)

John Mintz and Douglas Farah elaborate on the relationship between the United States government and the Muslim Brotherhood:

For years, State Department and CIA officials have met with Brotherhood activists in Egypt, Kuwait, Jordan, the Palestinian territories and elsewhere to track currents within Islamic politics.

At the same time, host governments in Cairo, Tunis and elsewhere warn that the Brotherhood is dangerous. So do many in U.S. law enforcement. “There were debates all the time about meeting with them,” Djerejian said.

Since the Sept. 11 attacks, pockets in the government — including officials in State’s Near East bureau and diplomats posted overseas — have quietly advocated that the government reach out to the Brotherhood and its allies. These officials and some in U.S. think tanks hope the Brotherhood can temper its anti-U.S. stance and become a barrier against jihadists worldwide. (No pagination)

Does the government really believe the Brotherhood will abandon its anti-American sentiments and act as a bulwark against jihadists? So far, neither has happened and the United States government still seems to be in a cozy relationship with the Brotherhood. If the Bush administration fully embraces the Brotherhood, that relationship will become formal and official. The unholy alliance between the Bush administration and the very terrorist threat it is supposed to be fighting will be out of the closet and in our faces. And, of course, it will be impossible for Bush to fight with someone who is his ally.