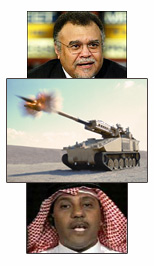 It is now official: the U.S Justice Department will be looking into BAE Systems to see if the UK defense firm violated any anti-corruption laws (“US to probe BAE over corruption,” no pagination). Of particular interest to the DOJ is BAE’s business relationship with a member of the Saudi Royal family, Prince Bandar bin Sultan (Sullivan, no pagination). Beginning in 1985, Prince Bandar brokered a series of arms deals totaling $80 billion between Britain and Saudi Arabia (no pagination). This series of arms deals came to be known as the Al-Yamamah (which is, ironically, Arabic for dove) (no pagination). Two billion dollars of that money ended up lining Bandar’s own pockets (no pagination). Suspicions surrounding the deal led to an investigation conducted by the Serious Fraud Office that might have turned up evidence of slush funds and bribes (no pagination). However, in December of 2006, the British Government dropped the investigation with Tony Blair claiming it would jeopardize the strategic relationship between Britain and Saudi Arabia (no pagination).

But the fraud investigation may have turned up a whole lot more about Prince Bandar. Is Prince Bandar merely a greedy Royal in search of profit and monetary gain? Evidence suggests an even darker side to the Saudi Prince beyond bribery and fraud. The darker side involves the financing of terrorists. In the case of Prince Bandar, the terrorists in question are none other than the infamous 9/11 hijackers. Of course, the 9/11 attacks are considered to be watershed moments in history not just for America, but for the whole world as well. It was an event that opened the door for US imperialism abroad and police state measures at home, all in the name of fighting terrorism. Therefore, it is hard for some to imagine that Prince Bandar, an individual who presents himself as pro-America to the public, would be involved in such a heinous act. However, before dismissing the claim, please consider Prince Bandar’s ties to the mysterious Saudi named Omar al-Bayoumi.

The only problem is that Majeda’s husband, Osama Basnan, was known to be a “vocal Al-Qaeda sympathizer” (no pagination). According to a law enforcement official, shortly after the 9/11 attacks, Basnan “celebrated the heroes of September 11” and referred to September 11 as a “wonderful, glorious day” (no pagination). Basnan is also known to have “met with a high Saudi prince who has responsibilities for intelligence matters and is known to bring suitcases full of cash into the United States” (no pagination). This all makes Princess Haifa and Prince Bandar’s actions look less like charity and more like the financing of terror.

The British Defense Ministry knew all BAE’s secret payments to Prince Bandar (Sullivan, no pagination). As a matter of fact, the Defense Ministry actually authorized the payments (no pagination). This seems to suggest that Bandar is more than just a terrorist financier. He is also a very well connected man. The Prince is plugged into the American power elite, particularly George H.W. Bush. An example of collaboration between the two is the Contra War. In 1982, Congress passed the Boland Amendment, which prevented spending U.S. funds to overthrow the Nicaraguan government (Unger 63). In 1984, Prince Bandar struck up a deal with National Security Advisor Robert McFarlane that would allow the National Security Council to bypass Congress for the cash it needed to conduct covert operations in Nicaragua. Under Prince Bandar’s arrangement, the Contras would receive $1 million a month from the Saudis (63-4).

When the agreement was brought before the National Security Group, James Baker was dead set against it, arguing that soliciting money from Saudi Arabia could led to impeachment (64). Bush came to the defense of Bandar’s plan. Craig Unger elaborates:

But Vice President Bush took issue with that position and said there was nothing wrong with encouraging third parties to help the anti-Sandinistas so long as there was no explicit quid pro quo. ‘The only problem that might come up is if the United States were to promise these third parties something in return so that some people could interpret this as some kind of exchange,’ he said. Bush, after all, had been director of the CIA. The way to do it, he seemed to be saying, was for the United States to let the Saudis finance the contras. Afterward, the United States could then reward the Saudis for their loyalty, but the two events would have to happen without being explicitly tied to each other. (64)

The amount of money the Contras received from the Saudis reached over $32 million (64). To reward the Saudis for their help, Reagan invoked emergency measures to avoid Congressional restrictions on the sale of Stinger missiles. King Fahd and Prince Bandar secretly received four hundred Stinger missiles they had always wanted (64-5).

The Reagan-Bush administration also used Prince Bandar as an intermediary when they wanted to do business with Saddam Hussein (65). Essentially, Hussein was a CIA creation and the bastard child of the power elite. In 1959, Hussein was part a CIA-authorized six-man assassination squad (Sale, no pagination). This squad was supposed to kill then Iraqi Prime Minister Gen. Abd al-Karim Qasim (no pagination). Qasim was making moves to remove Iraq from the anti-Soviet Baghdad Pact (no pagination). This move threatened to hurt the stability of the Cold War dialectic the power elite had constructed. The assassination attempt failed and Saddam escaped to Tikrit with the help of the CIA (no pagination). Saddam would end up in Beirut living in an apertment paid for by the Agency (no pagination). The CIA then helped the future dictator of Iraq get to Cairo (no pagination). This unholy alliance would continue with the Iran-Iraq war. Now the Hegelian activists of the American power elite wanted to transform Hussein into a future enemy, and Prince Bandar gladly lent his assistance by convincing the Iraqi dictator that he required American aid. Bandar made it possible for the administration to transfer weapons to Iraq through Saudi Arabia, Kuwait, and Egypt (Unger 65). All of this may have violated the Arms Export Control Act (65). Of course, Bush the elder was later able to use war with Iraq to promote the idea of a “new world order,” which is really just a euphemistic way of referring to a world government based on the principles of oligarchy and elitism.

The cozy relationship between the Bush dynasty and Prince Bandar can also be seen in the current uproar over BAE. BAE’s payments to Bandar were sent to accounts the Saudi Prince controlled at Riggs Bank (“US to probe BAE over corruption,” no pagination). President George W. Bush’s uncle, Jonathan Bush, was an executive at Riggs Bank at the time of the Al Yamamah deal (“Riggs Bank,” no pagination).

BAE’s shady dealings with Prince Bandar painfully illustrate what we can expect in the new world order. The new world order is a system where people in the hallowed halls of officialdom will be able to shake hands with terrorist financiers and criminals. Publicly, the Establishment will always present itself as the defended against crime and terrorism. However, behind the scenes, it will be business as usual.