Diener Consultants, the CNP, and the Implosion of the Minutemen 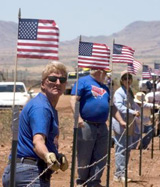 Back in 2005, these researchers warned that an elite-controlled racist fifth column within the Minutemen was destroying the immigration reform movement. Now, two years later, that prediction has come to pass with frightening accuracy. In the May 23, 2007 Sierra Vista Herald, Jonathan Clark reported two state-level officers in the Minutemen Civil Defense Corp. (MCDC) were dismissed for questioning Minutemen President Chris Simcox (no pagination). Eighteen state MCDC leaders put together a memo on May 8 addressed to Simcox, Vice President Carmen Mercer, and Executive Director Al Garza to attend a meeting in Phoenix to answer questions concerning the MCDC’s donors (no pagination). On May 14, Simcox responded with a memo threatening the 18 state-level leaders with the termination of their MCDC membership if they attended the meeting (no pagination). Twelve to thirteen state leaders went ahead with the meeting and issued a vote of no confidence against Simcox (no pagination). The Sierra Vista Herald reported that two leaders, Oklahoma Chapter leader Greg Thompson and New Mexico state director Bob Wright had their membership terminated (no pagination).

A May 23, 2007 article for the Southern Poverty Law Center painted a much grimmer picture. According to the article’s authors, Susy Buchanan and David Holthouse, 14 of the MCDC’s 27 state chapter leaders had been fired, as well as 1 regional leader and 3 national leaders (no pagination). Bob Wright sent out a mass e-mail on May 21 that stated: “By now you have probably heard rumors… about a massive purge of your National and State Leaders. These rumors are true” (no pagination). After being criticized for exposing problems within the Minutemen, we were vindicated. However, that vindication was anything but sweet. The implosion of a potentially good grass-roots organization was well under way. That is hardly anything to smile about. Sadly, the sweet taste of vindication turns to ashes in one’s mouth.

MCDC chapter leaders and rank-and-file members of the Minutemen wanted to know more about the $1.6 million to $1.8 million that Simcox raised by the end of May 2006 (no pagination). Where did all that green come from? Who gave the money? Many have paid the ultimate price for asking this simple question: excommunication. The money would have never become an issue if Simcox’s behavior was not suggestive of obfuscation. Simcox’s refusal to display financial responsibility has been demonstrated by the fact that the Minutemen President has never registered the MCDC with the IRS as a nonprofit corporation (no pagination). That means no periodic, detailed financial statements that would allow those members of the Amateur Colombo Club to follow the money trail.

The CNP is part of a project meant to dupe grass-root, conservative activists into supporting the initiatives of the power elite. This project began with Nelson Bunker Hunt. Hunt was a board member and financier of the John Birch Society (JBS) (Aho, no pagination). The JBS’s connection to the very power elite it claimed to be fighting was concealed by a public relations move in 1972 (no pagination). It was during that time period that the JBS promoted a book by current CNP member John Stormer entitled None Dare Call It Treason (no pagination). The book presented a scathing attack on the elitist organization known as the Council on Foreign Relations (CFR) (no pagination). In the public mind, this distanced the JBS from the elitist CFR and created the JBS’s anti-oligarchic façade. However, several JBS members such as William Grede, William Benton McMillan, Robert Waring Stoddard, J. Nelson Shepherd, and Spruille Braden were either directly or indirectly associated with the CFR (no pagination).

The CNP was created with the remnants of the domestic surveillance/intel-gathering arm of the JBS, the Western Goals Foundation (no pagination). Again, Nelson Bunker Hunt, who was also a principal character at Western Goals, provided the starter-up money for the CNP (no pagination). Hunt would go on to serve as the CNP’s president from 1983 to 1984 and also served on the CNP’s board of Governors (no pagination). As was the case with the JBS, the CNP was presented to the American public as an alternative to the CFR. ABC’s Marc J. Ambinder has even characterized it as “the conservative version of the Council on Foreign Relation” (no pagination). However, the CNP first Governing Board had three CFR members sitting on it: George F. Gilder, Dr. Edward Teller, and Guy Vander Jagt (Aho, no pagination). Later members of the CNP who were also CFR members included J. Peter Grace and Arnaud De Borchgrave (no pagination).

The CNP has engaged in a social engineering campaign within the Evangelical establishment by indoctrinating Christians into Dominionism. Chris Hedges provides a fairly accurate description of Dominionism:

What the disparate sects of this movement, known as Dominionism, share is an obsession with political power. A decades-long refusal to engage in politics at all following the Scopes trial has been replaced by a call for Christian “dominion” over the nation and, eventually, over the earth itself. Dominionists preach that Jesus has called them to build the kingdom of God in the here and now, whereas previously it was thought we would have to wait for it. America becomes, in this militant biblicism, an agent of God, and all political and intellectual opponents of America’s Christian leaders are viewed, quite simply, as agents of Satan. (No pagination)

Dominionism is the latest in a series of sociopolitical Utopian doctrines mandating the immanentization of the Eschaton. Re-conceptualizing objects of faith as objects of immanent experience, Dominionism inverts Ephesians 6:12. Flesh and blood becomes the enemy. Spiritual warfare becomes preemptive warfare. Ultimately, the Kingdom of God is established through a political coup. Jesus is either unwilling to or incapable of returning until such a coup is achieved. Such thinking is really nothing new. The secular Gnostics of communism and fascism also envisioned an Eschaton within the ontological plane of the physical universe. In their crusades to realize their eschatological visions, communists and fascists murdered countless numbers of people. The new Dominionist variety of Gnostic political activism promises equal volumes of bloodshed.

It seems that the elites behind the CNP are conducting a similar social engineering project within the immigration reform movement. The immigration reform movement has been radicalized with racist propaganda provided by an extensive network of organizations controlled by the racist and radical environmentalist John Tanton (“The Puppeteer,” no pagination). The power behind Tanton seems to be CNP financier Richard Mellon Scaife. According to the Southern Poverty Law Center:

Tanton’s most important funding source for the last two decades may well have been the Scaife family, heirs to the Mellon Bank fortune. Richard Mellon Scaife, a reclusive figure, has been instrumental in establishing right-wing organizations like the Heritage Foundation and supporting causes like the “Arkansas Project,” an effort to dig up dirt on President Clinton.

Scaife family foundations, including those controlled by Scaife’s sister, Cordelia May Scaife, provided some $1.4 million to FAIR from 1986-2000. (No pagination)

John Tanton even has his claws in the Presidential candidate that is supported by the Minutemen: Tom Tancredo. Tancredo’s campaign treasurer is Kenneth McAlpin (Sprengelmeyer, no pagination). McAlpin was a deputy director of the Federation for American Immigration Reform and is the executive directive of ProEnglish (no pagination). Both of these organizations are part of Tanton’s network (“John Tanton’s Network,” no pagination). Some might try to dismiss these examples of racism, citing the fact that CNP participant and African-American Alan Keyes has officially endorsed the MCDC. However, Keyes has a few racist skeletons himself. Keyes worked with fellow CNP participant Jack Abramoff’s International Freedom Foundation, which was “a Washington-based organization in part clandestinely funded by the South African military to prop up overseas support for apartheid” (Ballenger, no pagination).

When Michael Corbin and these writers first broke this story on the nationally syndicated radio program A Closer Look back in October of 2005, the reception we received was less than hospitable. We were viciously attacked by people who elected to abandon conspiracy fact in favor of nativist conspiracy fantasies that fingered Mexican immigrants, Jews, or even the Vatican as the enemy. Even NewsWithViews commentator Frosty Woolridge, a man who quotes literature from Tanton’s FAIR as if it were the Gospel, warned Michael in an e-mail about “disparaging the movement.” Amid all the angry protests, we still had the sense that we would be revisiting this topic again. Unfortunately, we were right, as is painfully evidenced by the current implosion of the Minutemen organization.