Why Are There No Obama Administration Officials in Copenhagen?

The relationship between President Obama and the Bilderberg Meetings has been the subject of sporadic speculation over the years. One hoary yarn, which receives an occasional airing, is that back in June 2008 Obama and Hilary Clinton, then both rivals for the Democrat presidential nomination had secretly attended that year’s Bilderberg Meeting, then underway at Chantilly in Virginia. There has been no actual confirmation that either of them did attend Bilderberg, but the suspicion – given the initial caginess about their whereabouts – has been sufficient for many to tar Obama as a Bilderberg puppet. The most recent reminder was on Alex Jones Infowars website, which posted excerpts from its Obama Deception video to remind us how Bilderberg “hand-picked Obama for the 2008 presidential election after a series of private meetings in Chantilly, Virginia.”

But missing from Infowars handy little reminder of an as yet unproven allegation – provided on the eve the meeting currently underway in Copenhagen, Denmark – was another more salient and indisputable fact: for the second year running no officials from the Obama Administration were attending Bilderberg. The official list of participants for this year’s Bilderberg Meeting, currently being held in Copenhagen, Denmark, includes 34 Americans. Many of them are former officials, but not one of them is a serving official in the Obama Administration. The nearest and only contender is US Air Force General Philip Breedlove, except that he is a career military officer and not a political appointee, and that he is participating in his current position as Supreme Allied Commander Europe, the military commander of NATO, and technically represents NATO rather than the US, hence his identification by Bilderberg as an “INT” or international participant.

It was the same pattern at last year’s Bilderberg Meeting in Hertfordshire, England, 6-9 June 2013, where there were 30 American participants, again with a smattering of former officials, but not one serving official from the Obama Administration. This is unusual, given that in 2010, the Obama Administration was represented by one of the largest official US delegations in decades with a total of seven senior officials listed as attending that year’s Bilderberg Meeting in Stiges, Spain (3-6 Jun 2010).

The Obama Administration’s first delegation, which attended the 2009 Bilderberg Meeting in Vouliagmeni, Greece (15-17 May), was only four in number, but at least three of them took the opportunity to brief those assembled on the new administration’s foreign and economic policies. As Politico subsequently reported:

A handful of high-ranking Obama administration officials this month delivered private briefings at the annual invitation-only conference held by an elite international organization known as the Bilderberg group.

The closed meeting of some of the most powerful business, media and political leaders in North America and Western Europe heard from top Obama diplomats James Steinberg and Richard Holbrooke, who detailed the administration’s foreign policy, while economic adviser Paul Volcker, chairman of President Obama’s Economic Recovery Advisory Board, also gave a presentation at the heavily guarded seaside resort in Greece that hosted the event.

[A] meeting attendee tells POLITICO that Holbrooke, a State Department special envoy, briefed attendees on the Obama administration’s unified approach to dealing with Afghanistan and Pakistan.

And yet, for reasons that the Obama Administration has not publicly addressed, there will be no senior US officials attending this year’s event in Copenhagen. This breaks a consistent trend where successive US administrations have made a point of ensuring that selected senior officials attend the annual Bilderberg Meeting. The graph below, drawing on participant data from the official Bilderberg Meetings website and the public intelligence site shows how over the past two decades successive administrations have ensured that at least one senior official is present at the meetings: 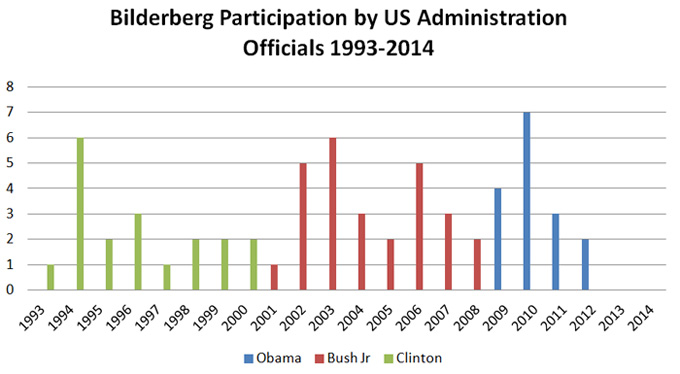 It should be pointed out, though, that these figures alone do not fully reflect the depth of each administration’s commitment to the Bilderberg Meetings. The administration of George W. Bush, for example, despite twenty-seven of its officials participating in Bilderberg Meetings compared to the twenty-one of the Clinton Administration, sent Cabinet-level officials only twice: Secretary of Defense, Donald Rumsfeld in 2002, and Secretary of State Condoleezza Rice in 2008.

The Clinton Administration, in contrast, patronised Bilderberg with Cabinet-level officials and others with a much higher frequency. To note: Secretary of Agriculture, Mike Espey, attended in 1994; the Secretary of Defense, William Perry, attended and presented at the 1996 meeting; and Secretary of Energy, Bill Richardson, presented at the 1999 meeting. In addition, Deputy Secretary of State Strobe Talbott hosted and spoke at a Bilderberg dinner, held at the US Department of State on 5 October 1995; and Clinton’s National Security Advisor, Sandy Berger, gave a speech to the Bilderberg Steering Committee on 4 November 1999 on “An Internationalist Agenda for America.”

But the Clinton Administration’s engagement with Bilderberg went much higher than that. Recently, the William J. Clinton Presidential library released documents confirming conspiracist claims that then First Lady, Hilary Rodham Clinton had attended and given a speech at the 1997 Bilderberg Meeting at the PineIsle Resort in Georgia. Also revealed in the release of the Clinton Administration records, is that Bill Clinton, who was widely known to have attended the 1991 Bilderberg Meeting at Baden-Baden in Germany, also patronised Bilderberg as President, speaking to a gathering of the Bilderberg Steering Committee, then in conference at the Four Seasons Hotel in Washington DC, on 6 October 1995 (the day after Talbott’s dinner speech). An excerpt from Clinton’s daily schedule is reproduced below: 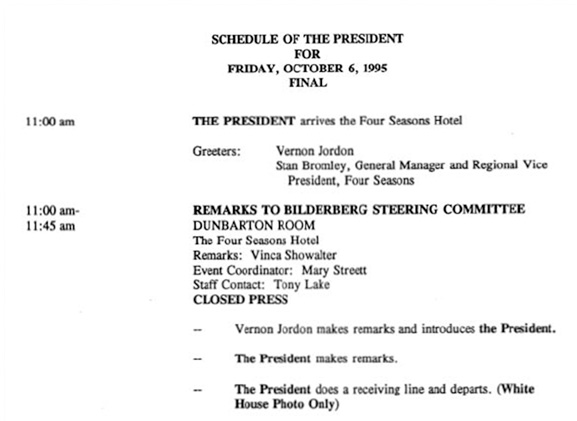 Detail of President Clinton’s visit to the Bilderberg Steering Committee in October 1995 from the President’s Daily Schedule.  Source: Schedule for the President, October 1995, pp.17 (heading) & 18 (detail)

In comparison, of the twelve officials the Obama Administration has sent to Bilderberg, only one was Cabinet-ranked: then Director of the Office of Budget and Management, Peter R. Orszag, who attended in 2010. Moreover, despite having attended previous Bilderberg Meetings, neither Hillary Clinton nor (thus far) John Kerry has attended Bilderberg as Obama’s Secretary of State. So far the highest ranking State Department official to attend has been Deputy Secretary of State James B. Steinberg in 2009, 2010, and 2011.

There are a number of plausible reasons for the poor attendance by the Obama Administration at this year’s event. A scheduling clash seems the most likely, with this year’s Bilderberg Meeting happening to coincide with the high profile Shangri-La Dialogue, being held in Singapore from 30 May to 1 June. However, the US State Department does not appear to be heavily involved in this event, with the US delegation being led by Secretary of Defense Chuck Hagel. And yet, Secretary of State Kerry and most of his senior staff seem to have other priorities, judging by their public schedules for 29 and 30 May, without even an assistant secretary of state to spare for Bilderberg. It seems remarkable the Obama Administration would pass up this opportunity for some transatlantic confidence-building, given the recent troubles in the Ukraine, and to also further explain Obama’s recent speech on his foreign policy doctrine, given at the US Military Academy at West Point.

Another plausible reason is a lack of confidence their private off-the-record comments at Bilderberg will stay private. This is a real concern, particularly after John Kerry’s off-the-record comments about the Ukraine and Israel at a “closed press” Trilateral Commission meeting in April this year were given wide airing after a journalist managed to infiltrate it.

The final and most extreme possibility is Obama, who had to put aside his own political discomfort with dealing with the wealthy to gain the White House, no longer has any stomach for patronising the dens of the power-elite. Indeed, it seems plausible a tired, jaded and isolated Obama, having failed to achieve the giddy world of possibility that his soaring rhetoric once promised, having been defeated and repeatedly compromised by the powers-that-be in Washington on a number of issues, no longer sees any value in dealing with the sort of people who dominate Bilderberg.

Obama’s reluctance to coddle rich donors and his ability to put the super-rich offside was noted by a number of journalists in the lead up to the 2012 election. This unease about dealing with the plutocracy had also been articulated in his campaign book, The Audacity of Hope (2006), where he wrote about how the perceptions of politicians could be corrupted through spending too much time with the wealthiest members of society:

…I became more like the wealthy donors I met, in the very particular sense that I spent more and more of my time above the fray, outside of the world of immediate hunger, disappointment, fear, irrationality, and frequent hardship of the other 99 percent of the population—that is, the people that I’d entered public life to serve (p.114).

Despite his conspicuous failure to even to begin to restrain America’s plutocrats, it may well be that the Obama Administration’s absence from Bilderberg in 2013 and this year (barring any surprise visits) was a belated (though ultimately ineffectual) gesture of dissent.