May Day and the Posthumous Influence of the Illuminati

“Just how significant is the impact of leftists within the illegal immigration movement? It is no accident that they chose May 1 as their day of demonstration and boycott. It is the worldwide day of commemorative demonstrations by various socialist, communist, and even anarchic organizations.”

“On May 1, the world working class displays its strength in demonstrations and strikes,” explains communist writer Andy McInerney in the Spring 1996 issue of Liberation & Marxism. “May Day — International Workers’ Day — is a reminder to the ruling classes that their days are numbered…. From 1919 onward, the success of May Day in the United States would depend on the success of the communist movement.” 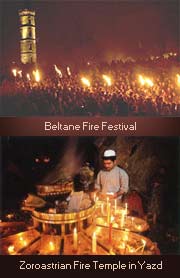 Secret societies do nothing without multiple layers of esoteric meaning; symbolism is of vital importance. It was in this tradition that Adam Weishaupt founded the Illuminati on May 1st, 1776. When we look at the doctrine of the Illuminati, it becomes clear that the choice of May Day for its birth was no coincidence.

Weishaupt was well aware of the pagan celebrations that had been practiced for thousands of years on the first of May—which were maintained in some form up to Weishaupt’s time, and still continue to this day. Beltane, as it is known in the British Isles, marks “the midpoint in the Sun’s progress between the vernal equinox and summer solstice.” The etymology of the word means “bright fire”, “bale-fire” or “Baal’s fire”. The festivals on May 1st literally stem from a form of sun and fire worship.

“Beltane is one of the four Celtic Fire festivals, and is probably the second most important festival next to Samhain. Beltane is primarily a sun festival and was performed during the day. The most important part of Beltane was the kindling of the fires. The Irish Celts would extinguish their fires the night before and would eat a cold meal to insure that all fires were out. Then they would attend the ceremony, returning with an ember to once more start their fires. The fire festival later evolved into the Celts driving their cattle through two fires to purify the herd. This was done to insure good health of the cattle for the coming year. Modern day pagans will jump over the Beltane fires, though very few actually know why they do so.”

– Gordon Ireland, Beltane – May 1 or May Day

“Beltane, in Irish, or Bealtuinn Scottish Gaelic. The original meaning is ‘Bel’s Fire’ which designates it as one of the major Fire Festivals. Bel is sometimes refered to as the God of ‘Light.’ He is also known as Beli or Belinus and may be traced to the Middle Eastern god Baal. Some Beltane customs are also very similar to the old Roman feast of flowers, the Floriala.”

A few days prior to Bealtine season, every flame was ordered extinguished, to be relighted on the first of May by holy fire drawn directly from the sun. Of fire-worship Toland observes:

“On May-day the Druids made prodigious fires on these cairns, which being every one in sight of some other could not but afford a glorious show over a whole nation. These fires were in honor of Beal, or Bealan, Latinized by the Roman writers into Belanus, by which name the Gauls and their colonies understood the sun, and therefore, to this hour, the first of May is, by the aboriginal Irish, called la Bealtine, or the day of Belan’s fires. May-day is likewise called la Bealtine by the Highlanders of Scotland, who are no contemptible part of the Celtic offspring. So it is with the Isle of Man: and in Armorica a priest is called Belee, or the servant of Bel, and the priesthood Belegieth.”

– Eliza Burt Gamble, The God-Idea of the Ancients (or Sex in Religion)

There’s two reasons why May 1st was chosen as the founding of the Order of the Illuminati. The first being that fire worship was central to the celebrations on that day. And likewise, fire-worship was to be the basis of the highest mysteries of the Illuminati. Weishaupt had written to his devoted disciple Zwack, that he is “warming up the old system of the Ghebers and Parsees …”

“The allegory in which the Mysteries and Higher Grades must be clothed is Fire Worship and the whole philosophy of Zoroaster or of the old Parsees who nowadays only remain in India; therefore in the further degrees the Order is called ‘Fire Worship’ (Feuerdienst), the ‘Fire Order,’ or the ‘Persian Order’ – that is, something magnificent beyond all expectation.”

The second reason for the founding date of May 1st relates to the fact that in communications between members of the Order, the word Illuminati was to be symbolized by a point within a circle: ☉. This has always represented the sun, probably before writing was even invented, and the Egyptians used it thousands of years ago as the Hieroglyphic symbol for the sun-god Ra. The May Day festivals were an enactment of both sun and fire worship; so May 1st—giving the overt symbolism of the Order—was a perfect day (symbolically) for the founding of the Illuminati. The connection between the point within a circle and May Day celebrations is also manifested by the practice surrounding the Maypole.

The song that eventually rallied revolutionaries, and became the national anthem of France, originated with a member of the Illuminati: Philippe-Frédéric Baron von Dietrich (1748-1793), code name Omarius. Dietrich was the Mayor of Strasbourg in 1790, 1791 and 1792. He was a victim of the French Revolutionary Reign of Terror, and guillotined on December 29th, 1793 in Paris. He was replaced by Eulogius Schneider (Jacobin and Illuminist, public accuser before the revolutionary tribunal) who became the tyrant of Strasbourg and the conductor of public executions.

In 1792, as news reached Strasbourg of the German Monarchs’ declaration of war on Revolutionary France, Dietrich commissioned a young engineer, Claude-Joseph Rouget de Lisle, to write a patriotic song to rally the people: Chant de guerre pour l’armée du Rhin (War song for the Rhine Army). The revolutionaries, however, adopted the song for themselves, calling it La Marseillaise. The significance of this anthem is that it became the battle cry for French revolutionaries in the 18th century, the 1848 French Revolution as well as future communists and anarchists. In Chicago, the Haymarket Square rioters of 1886, for instance, sang the song during the first May Day workers’ rally. As Oscar Ameringer declared: “Only red flags were carried in that first May Day parade, and the only song we sang was the ‘Arbeiters Marseillaise,’ the battle cry of the rising proletariat. Even the May Day edition of the Arbeiter Zeitung was printed on red paper.” 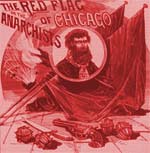 It was that first May Day protest which is commemorated by Unions, Communists and Anarchists worldwide as Labor Day or International Workers’ Day. The Marseillaise was sung that day in Chicago, and the Red Flag was flown. The strikes continued and on May 4th there was a tragedy: an anarchist threw a makeshift bomb into a crowd of police, killing one officer instantly while seven more later died of injuries. The police opened fire wounding twelve protesters and killing four.

All this is a part of history and there is much information on the web about the Haymarket Massacre, the subsequent arrest and execution of the “Haymarket Martyrs”, etc. But why was May 1st chosen for the strikes in the first place?

It was no accident that the illegal immigration movement chose May Day for their demonstrations. Likewise, it is clear to me that the date adopted for the 1886 protests was no accident either. In our time, as before, the chosen date is a symbolic gesture.

On the surface May 1st, 1886 seems to have been chosen arbitrarily. As the story goes, in 1884 the U.S. Federation of Organized Trade and Labor Unions:

…passed a resolution which asserted that “eight hours shall constitute a legal day’s work from and after May 1, 1886, and that we recommend to labor organizations throughout this district that they so direct their laws as to conform to this resolution”.

“On May 1, 1886, workers took to the streets in a general strike throughout the entire country to force the ruling class to recognise the eight-hour working day. Over 350,000 workers across the country directly participated in the general strike, with hundreds of thousands of workers joining the marches as best they could.”

– MIA: Encyclopedia of Marxism: Glossary of Events (May Day)

The U.S. Federation of Organized Trade and Labor Unions began in 1881 and stemmed from the British Trade Unions. The US branch was co-founded by Samuel Gompers, and he was in charge of the committee that decreed the May 1st ultimatum. Gompers was born in England in 1850, and was “heavily influenced by Karl Marx“.

“… a student of socialism. With colleagues like P.J. McGuire, Hugh McGregor, Adolph Strasser, and J.P. McDonnell (all of whom would become longtime associates) he participated in meetings of the International Workingmen’s Association, the Economic and Sociological Club, and the Workingmen’s Party of the United States.”

– Who was Samuel Gompers, Anyway?

Not only was Gompers attending meetings of Karl Marx’s communist International Workingmen’s Association (First International); he was also initiated into its inner circle, Die Zehn Philosophen, in 1873. This inner core of “ten philosophers” can be likened to a society within a secret society, as was the modus operandi of the Illuminati itself. Gompers—an “Areopagite” in the first international communist movement—would be the guiding hand, less than 10 years later, in the decision to mobilize the “proletariat” into action on the sacred Illuminati date of May 1st.

Socialists today would have you believe that the Haymarket riots were the catalyst for the 8-hour workday, when in actuality all that the violence accomplished was to delay the implementation of workers’ rights: “The Haymarket Riot branded as ‘radical’ the eight-hour-day movement and diminished popular support for organized labor.”

Similar staged agitation, with identical Hegelian consequences, was witnessed in Gompers’ native England during the middle of the 1800s:

Nearly the whole of the loss arising from strikes fell on the innocent and industrious labourers, willing and anxious to work, but deterred from doing so by the threats of the unions, and the dark menaces of an unknown committee. The mode in which these committees acquire such despotic authority is precisely the same as that which made the Committee of Public Safety despotic. Terror—terror—terror

It began to be common talk that among trades associations there was systematic terrorizing of the worst kind, and that a Vehmgericht more secret and more grim than any known to the middle ages was issuing its sentences in many of our great industrial communities.

Nesta Webster recounts how, “during the years of 1834 to 1860,” grievances broke out in Scotland and England with hitherto unknown ferocity. Uncooperative workers were murdered and their houses burnt down.

“The truth is clearly that Illuminism, following its usual course of insinuating itself into every organization framed for the benefit of humanity, and turning it to an exactly opposite purpose, was using Trade Unionism, which had been designed to liberate the workers, for their complete enslavement.” (Ibid., p. 126)