Where the debate over privacy rights is concerned, there exists a perpetual danger of being drawn into one of two extreme camps: One that would dismantle all security entirely, leaving us open to those very real threats that exist at home and abroad, and the other that would submerge our basic rights and freedoms beneath an Orwellian surveillance state, all in the name of our collective safety. Of course; freedom isn’t free, it just seems that way because we have been blessed to live in an oversaturated freedom market. On the other hand, although the price of freedom is still eternal vigilance, it seems there are those who would impose an artificial price hike; having us pay eternal vigilance, plus groping and manhandling fees, plus a whopping one hundred and fifty percent interest. These folks don’t necessarily hate freedom, they’d just prefer that you visit it in a museum under a glass cover.

If this sounds like a paranoid fantasy, let us reflect upon the following evidence for the recent and undue ascension of Big Brother in our Western Democracies.

Security Cameras have only increased in the last several decades and are perhaps most prevalent in the United Kingdom.1

Though earlier statistics that placed the U.K’s security camera count at a whopping 4.2 million have since been challenged, even conservative estimates still lean towards the shockingly high approximation of 1.85 million cameras.2 That’s one video camera for every 32 British citizens.

Despite the rapid spread of cameras throughout the U.K, many have argued that there is little evidence to show that the increase of surveillance technology has lowered the crime rate in any significant way.3

Anyone who has traveled by airplane either to or within the United States since November of 2010 is by now familiar with the Transport Security Administration’s Full Body Scanners. Passengers wishing to board their flights are given the choice between an invasive pat down by TSA staff or stepping through a scanner that provides security personnel with an on screen image of the passenger’s fully naked body.4 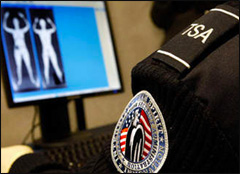 While some less modest citizens, unfettered by archaic, Victorian attitudes towards public nudity, might find this experience no more intrusive than the longstanding metal detector method, it is important to note that complaints about the scanners aren’t limited to prudes and privacy rights groups. Numerous scientific experts and agencies have expressed concerns over the possible radiation dangers of the so-called backscatter x-ray scanners, especially where young children and pregnant women are concerned.5

While surveillance imposed from on high has historically met with vocal opposition from the anti-establishment crowd, there also exists a more subtle threat to privacy, whose ostensible grassroots origins often allows it to pass under the public radar. These are technologies available for public consumption, which place the awesome power of the All-Seeing Eye, in the hands of the average technophile. But are the watchful eyes of several million Little Brothers really preferable to one Big Brother? This is something that society must decide as it comes to grips with the technological advancements that have brought us to this point. Let us renew our examination with this publicly available surveillance technology in mind. 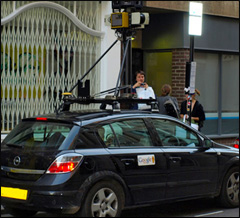 Although Google Streetview is a popular and convenient tool for finding locations, it too has raised certain concerns since its introduction in 2007.

While worries about privacy have been partially alleviated by Google’s introduction of face blurring technology,6 controversy reared its head again in May of 2010 when Google revealed its Streetview program had been collecting information about citizens’ website access on public Wi-Fi networks. Though Google claimed this to be the unintentional result of a programming error, Australia’s Communications Minister, Stephen Conroy, not only alleged that Google’s data mining was intentional but called the whole affair “the largest privacy breach in the history (of) western democracies.”7

While cameras have been around for generations, the more recent merger of digital cameras and cell phones has enormous implications where privacy is concerned. Relatively inexpensive, easily concealed and able to transmit images instantly over the world wide web, the rise in cell-cam technology, coupled with a general lack of etiquette on the part of many users, has only served to lower the bar on what is considered invasive behaviour.

While it is true that phone-cams can be used to catch criminals red-handed, there is, nonetheless, something of a disturbing 1984 quality to New York Mayor Michael Bloomberg’s public call for citizens to photograph supposed crimes and transmit the images to law enforcement agencies.8 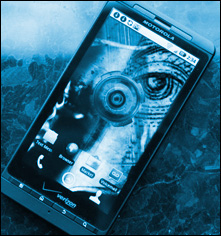 As invasive as the aforementioned phone cams might be, their intrusive nature pales in comparison to another form of cell phone technology. It was recently revealed that so-called smart phones, like Apple’s iPhone and Google Android track users’ geographic positions and not only store the data on the users’ phones but transmit the information back to the respective companies themselves. Anyone accessing this info would have a virtual travelogue of the user’s daily routine.9

Though the companies claim users can opt out of this function a recent test run by the Wall Street Journal suggest that the data is still transmitted back to Google and Apple whether the user turns off the feature or not.10

While Facebook’s possible origins in the U.S government’s now defunct Information Awareness Office11 may be dismissed as an exaggeration by many, that by no means erases the threat the Social Media Giant poses to individual privacy.

The United States Supreme Court views even private info put on Facebook as information shared with a third party, and thus not protected by America’s Fourth Amendment right against unreasonable or unwarranted search and seizure.12

Concerns are by no means limited to the United States; in 2008 The Canadian Internet Policy and Public Interest Clinic filed a complaint with Canada’s Privacy Commissioner, charging Facebook with 22 separate violations of the Canadian Personal Information Protection and Electronic Documents Act.13 Additionally there are the myriad cases of people falling pray to burglars, after carelessly revealing themselves to be on vacation in their Facebook profiles.14

Considering the mass success of Facebook and other social media technologies and the way they have contributed to the erosion of privacy standards, one might be reminded of Aesop’s fable of the Sun and the Wind. Attempting to separate a Traveller from his cape, the Wind blows with all his fury, which only makes the Traveller huddle beneath his cloak all the tighter. The Sun however, has more success, gently beaming down his rays till the Traveller casts aside his robe to bask in the soothing warmth. The moral: You can achieve more with gentle persuasion than with brute force.15

Ultimately, if the battle for privacy is ever lost, the surveillance state will not at first be imposed from above but more likely given to us in the form of fun toys. People who might normally object to being spied on, might have fewer qualms about spying on their neighbours. The old question, “who will watch the watchmen?” becomes somewhat paradoxical when we have all become watchmen ourselves.