Originally Published at Conspiracy Archive on 2010/02/20

Rather than being ostensibly concerned with charity, helping burn victims, or “chipping” children, Grand Orient masonry is presently consumed with exerting political influence; “reconquering,” and remoulding Europe in the name of secularism and humanism; in direct opposition with religion (sects of any kind) and the Vatican in particular.

In Europe, some things never change. 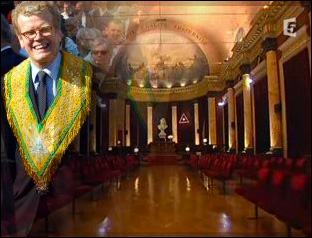 The influence of religion upon MEPs is considered too strong

Is the religious sphere strangling the work of the European Parliament? It’s a gradual but insistent question, as ethical issues (abortion, stem cells, etc.) become the subject of debate between supporters of a secular Europe and those who would like to see tomorrow’s society moulded by their religious beliefs. For some freemasons, it is time to reconquer lost ground.

In 2008, Marcel Conradt, Freemason and parliamentary assistant to the Socialist MEP Veronique De Keyser, denounced the assault of “religious lobbies and sects” on Europe (Le cheval de Troie. Sectes et lobbies religieux à l’assaut de l’Europe, in Editions du Grand Orient de Belgique). Their objective: influence legislation and decision makers, especially MEPs. Around 80% of the national legislation of member states is developed at the European level. The author described the influence of the churches, but also cults such as Scientology or the Raelian movement, and urged the secularists to maintain a Europe that would leave God out of politics.

Since then, a special recognition was given to churches. The Lisbon Treaty guarantees them an “open, transparent and regular” dialog with the institutions. They are regarded as “partners” rather than as “lobbyists” who are required to divulge their sources of funding.

In principle, everyone acknowledges the right of churches to voice their opinions. The problem for proponents of the secular camp is, in particular, the growing imbalance between the two “sides”. Marcel Conradt did not fail to remark that the Commission (Barroso), Parliament (Buzek) and the Council (Van Rompuy) are chaired by people with religious conviction. Several countries admitted into the EU believe the Bible over Voltaire. In addition to Ireland or Italy, there are countries anxious to defend the Catholic tradition. The recent debate in the EU over the display of religious symbols in public buildings is an indication of the tensions.

The savage retorts are legion. On February 3rd, during a debate on interreligious dialogue at the European Parliament, an ultra-Catholic Italian close to Benedict XVI delivered an attack against “a European plague of apostasy” while an Irish lobbyist bemoaned that the “right to equality comes at the expense of religious rights.”

Meanwhile, in another assembly, a line appears to have been crossed. A leak to the Council of Europe has revealed the obvious desire on the part of the Catholic Church to escalate from influence to interference. In January, in fact, the apostolic nuncio in France had not hesitated to solicit parliamentarians to endorse one of their representatives to the post of judge at the European Court [of Human Rights] in Strasbourg. Tempers flared over the perceived nepotism of the recommendation, rather than his ability to be impartial.

This situation stimulates the longing of secularists to regain lost ground. For some Masonic Obediences, it is time to exert an influence at the European level. “It must be pointed out that there are other choices for society,” argues Conradt.

In the past the masons could have had their opinions heard by the President of the European Commission, but not necessarily with a single voice. So now they try to unite their different schools of thought, and to do it more openly. This is a revolution for many obediences accustomed to secrecy. Thus the Grand Orient of Belgium has preferred not to respond to our questions…

The last obstacle: lack of access to the highest political level. “We cannot appeal directly to a head of State or Government at the European Council,” said Marcel Conradt.

The Humanist Federation also works to defend the values it imparts to institutions, like the Centre d’action laïque (CAL) [Secular Action Center], to whom, as its chairman Pierre Galand [has said], “Europe has become strategic.” Galand sees lobbying as “a first step in a European plan.” He added: “Belgian secularism is better organized, better positioned to lead European secularism and the work toward the separation of church and state.”

Secularism versus confessionalism. The struggle [has necessitated] a re-examination of interests and may also contain a lot of surprises. Thus, contrary to what was anticipated, the Socialist MEP Marc Tarabella witnessed the last paragraph of his report devoted to abortion, “Gender Equality,” voted on by a large majority of his peers. There was however no question of “easy access” to abortion, a right advocated by him. And due to a group of conservative voices, laments Tarabella, “such a vote hasn’t occurred since 2002.” He attributes the resulting “evolution” to “the rejuvenation of Parliament and the presence of 35% women.” This puts a damper on those who would leave European integration up to the whim of the gods.

“The [Masonic] Obediences must be political”

In 2008, for the first time, we’ve managed to get a meeting with the President of the European Commission, Jose Manuel Barroso. There was the Grand Orient de France, the Grande Loge féminine de France, the Droit humain and the Grand Orient of Portugal. We told him that apart from its Christian roots, Europe owed much to the philosophy of Greece and Rome, to the humanism of the Renaissance and the Enlightenment. We also obtained representation for Masonic obediences and those in defense of secularism in the Bepa (Editor’s note: the office that advises the President and the Commission on politics), which had previously only been for religious and spiritual groups. When we organized an international masonic gathering in Athens in 2008, Barroso had written us a message about the importance he attached to the contribution of masonry to the history and integration of Europe. This for us is recognition within the intellectual landscape. Nevertheless, difficulties remain in spreading the secular message, and more importantly, churches are still very much present … A great battle must still be waged [un grand combat doit encore être mené].

Within the Grand Orient of France, we created a small organization that is in charge of organizing Masonic obediences throughout Europe.

We are looking toward a federation among obediences. But there are two major challenges: to speak with one voice, and abandon the culture of secrecy. How?

It is in effect difficult to unite because there are many obediences, who possess a strong spiritual current, which lag behind on societal issues and in particularly on secularism – not to mention the Grand Lodge of France. The Grand Lodge of France is a little shy. I’m not sure what the position is of the Grand Lodge of Belgium. But still, when we see what can be achieved together the Grand Orient of France, Belgium, Portugal … or when we observe what has occurred in Greece, the former Eastern bloc, the Maghreb, Lebanon and Israel, it is noteworthy that liberal and non-dogmatic masonry is still a strong current. We need the Masonic obediences to become political in the best sense of the word; that beyond the current partisanship they can discuss secularism and express disagreement with governmental decisions.

The International Masonic assembly was created in Strasbourg in 2007. Subsequent meetings were held in Greece and Turkey. In 2010, it will be in Portugal. The Masonic obediences have been united to this view. I am optimistic.

When can we expect to see in Brussels a bureau representing Masonic ideas and interests?

I think we will one day create a general delegation of masonry and, with this, free thinking in European institutions. It is possible politically, but more difficult financially, because we have far fewer resources than the churches.

What would be your first battle?

Beyond the fight for secularism, there is a battle to wage against communitarianism in society. Europe is influenced by the Anglo-Saxon conception of the relationship between religion and state, as well as multiculturalism. Now we must impose the universalist conception of the Enlightenment, which involves spreading the notion of European citizenship before the Jew, the black, the North African, homosexual, heterosexual, etc. One must come to understand that what unites us is a certain idea of man regardless of descent.