Originally Published at Conspiracy Archive on 2010/01/13

There’s a growing field of scholarly study devoted to unravelling Masonic, esoteric symbolism in architecture. James Stevens Curl is perhaps the authority on the subject with such works as The Art and Architecture of Freemasonry and The Egyptian Revival. And more recently, the obsessive investigations of Frank Albo on the Manitoba Legislature building have informed a wide audience on the notion that Freemason-architects have constructed buildings that not only incorporate hermetic/occult symbolism, but intended as “a type of initiatory theatre.”

In a similar vein, comes an offering by Lance Factor, Professor of Philosophy at Knox College – Chapel in the Sky: Knox College’s Old Main and Its Masonic Architect. In an article at the Knox College website, we read that the book, “released this month by Northern Illinois University Press, explores how in 1856 Old Main’s architect, Charles Ulricson, secretly incorporated symbols from Freemasonry into the main campus building of a fervently anti-Masonic institution.”

More to the point:

According to Factor, Old Main’s design, geometry, windows, and interior decorations all show tell-tale signs of Freemasonry. “Ulricson essentially hid his Masonic symbols in plain sight of his clients, who were vigorously anti-Masonic,” says Factor, who also discovered that College trustees appear to have been concerned only about the cost of the project.

“Ulricson was profoundly influenced by his work at Town and Davis in New York,” Factor says. “Alexander Jackson Davis taught Ulricson that architects belonged to a ‘sacred priesthood.’ From Ithiel Town, Ulricson learned the secret doctrines of ‘alchemical’ or ‘esoteric’ architecture — the idea that the form of a building could shape the characters of the people within. Alchemical architecture included a belief in a geometric version of the ‘Philosopher’s Stone,’ a mythical substance that unified the four elements — earth, air, fire and water. It also included techniques for drafting with a Masonic Cubit and for transforming buildings into talismans, which Freemasons believed carried the protective energy of the Divine Architect and Geometer of the Universe.”

It goes on to describe the Masonic-inspired proportion and dimensions of the building; use of the golden ratio; and “talismanic patterns” of dodekatopoi (or dodekatopos) – 12 angles around a rectangle, symbolic of the Zodiac – in the windows which, according to Factor, “contain a secret message about the spiritual purpose of Old Main.”

Factor says explicitly that Ulricson was indoctrinated into this esoteric architecture by Alexander Jackson Davis and Ithiel Town. Interestingly, these two famous architects have had dealings with either Skull and Bones itself, or the Russell family of Skull and Bones fame.

Alexander Jackson Davis, for example, has been suspected for sometime as being the architect of the Skull and Bones Tomb at Yale. From Patrick Pinnell’s The Campus Guide: Yale University (p. 42):

After carrying on operations in rented rooms for a couple of decades, the [Skull and Bones] society built the first part of its present structure in 1856, when the block was mostly occupied by large, single- or two-family houses and stables. Seen from High Street, the left-hand block was the first building, its door in the center where there is now a window. A second piece was added onto the rear in 1883, then, Yale’s typological conservationism at work, the original chunk was faithfully duplicated in another expansion in 1903. A new entrance was put between the new and old testaments – er, wings. The architect of the original Austin (1804-1891), and very occasionally A. J. Davis (1803-1892), but neither Austin’s nor Davis’s archives contain drawings for it. Both architects did work in the area at the time, and both their oeuvres contain examples of comparable brownstone-built romantic gloom. Overall proportions, the face-bedding of the stonework, as well as the bluntness of the Egypto-Doric detailing would suggest Austin, but on the other hand, when Davis’s 1851-53 Alumni Hall was demolished in 1911 to make way for Wright Hall, Bones carted the stonework of its twin Gothic towers down High Street. Re-erected behind the tomb, they have presided over a hidden garden since 1918. Whether this was an act of filiel architectural piety cannot be known until the Russell Trust cracks open its vaults. 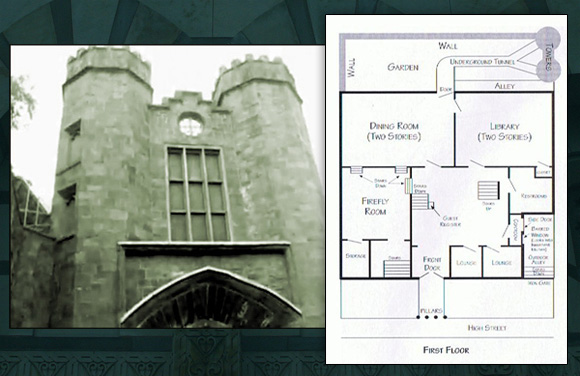 You can see Davis’ Gothic towers in the recent video uploaded to YouTube, shot inside the Tomb courtyard (at 1:57 to 2:00) – in the middle of which now includes a carving of ominous grim reaper skeletons (1:11 to 1:21).

Ulricson’s other mentor, Ithiel Town, had built Samuel Russell’s house. Samuel was the cousin of the co-founder of Skull and Bones, William Huntington Russell. “Samuel Russell formally established Russell & Co. on January 1, 1824 for the purpose of acquiring opium and smuggling it to China,” writes Kris Millegan. Town had also built a house for Samuel’s brother, Edward Augustus Russell.

In an early 2009 article at Knox College, professor Factor divulged that Ithiel Town had “amassed a library of some 5,000 volumes on occult and esoteric philosophy.” Further details on the esotericism of Ithiel Town can be had from an article by Alan B. Solomon – “211 Pearl Street: Unearthing the Esoteric Interests of the Architect Ithiel Town and the Owner William Colgate” – which looks at the particulars of Town’s library (and some of the contents) as well as a mysterious “Brickwork symbol, incorporated into the façade of 211 Pearl Street,” which construction workers had dubbed an “Illuminati Shrine.”