Originally Published at Conspiracy Archive on 2009/12/14 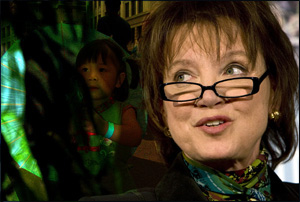 She writes that a “one-child policy,” “planetary law … is the only way,” and admits that China’s one-child-only measure is in fact an edict: e.g. an authoritarian/totalitarian decree. Nothing will work to cure “environmental degradation,” unless “a China one-child policy is imposed.” “Governments should control family sizes,” or we’ll regret it, she writes.

Watch Francis try and dissemble in this interview (failing miserably):

Here’s a quote from another Francis interview, which illustrates her elite mentality: “The fact is we have a global economy and we have no global governance and so what we’re seeing is the beginning of a global government….I think it’s a welcomed development.” Diane Francis, National Post (3:53-4:19)

Francis has received a lot of flak after writing the article; it was a colleague, Colby Cosh, who made one of the best points:

I don’t understand why people who claim to be “passionate” about the environment of the future haven’t adopted zero-child policies for themselves.

Well, actually, I do understand it, because they all used to be big on Zero Population Growth as both a policy goal and a social ideal back in the ’70s. Diane Francis is singing an old song that environmentalists unlearned for strategic reasons. It made them look like she looks right now: authoritarian and nihilist and out of touch with the hopes and ambitions of ordinary people. And many of those environmentalists wanted to have kids themselves — i.e., they hypocritically put their personal desires above the interests of the planet when confronted with the biggest choice of all.