Freemasonry: “When man reaches new worlds, Masonry will be there.”

Originally Published at Conspiracy Archive on 2009/07/19 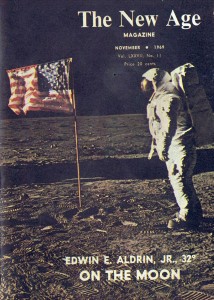 The above was a quote from the December 1969 issue of the The New Age Magazine, the official magazine of the Supreme Council 33° A.&A. Scottish Rite of Freemasonry of the Southern Jurisdiction, Washington, D.C. (See the details here.) Edwin E. Aldrin, Jr., 32°, visited the Scottish Rite headquarters at the House of the Temple in Washington, September 16, 1969, after the historic moon landing of Apollo 11, and brought back the Freemasonic flag that he took with him to the moon.

The Apollo program was rife with Masons; they were proud of being involved, and weren’t shy about advertising the fact.

In the November 1969 edition of The New Age Magazine, there is an extensive article by Kenneth S. Kleinknecht, 33°, the Manager of the Apollo Program Command and Service Modules; Deputy Manager, Gemini Program; Manager, Project Mercury.

Note how many of the astronauts themselves are Brother Masons: Edwin E. Aldrin, Jr.; L. Gordon Cooper, Jr.; Donn F. Eisle; Walter M. Schirra; Thomas P. Stafford; Edgar D. Mitchell, and Paul J. Weitz. Before his tragic death in a flash fire at Cape Kennedy on January 27, 1967, Virgil I. “Gus” Grissom was a Mason, too. Astronaut Gordon Cooper, during his epochal Gemini V spaceflight in August of 1965, carried with him an official Thirty-third Degree Jewel and a Scottish Rite flag. Via the lunar plaque, the Masonic ensignia and flag, and the Masonic astronauts themselves – Masonry already is in the space age. Can we doubt Freemasonry and its spiritual relevance to the modern era when even its material representatives have today made historic inroads into the infinite expanses of outer space?

Back then, Freemasonry wasn’t shy about admitting that the “Craft” is essentially a spiritual endeavor, either. In fact, right before Kleinknecht writes some bios on the Masonic astronauts (as well as Mason James Edwin Webb, the NASA administrator from 1961-68), he includes these words: “The mission of the Craft has always been one of salvation, but until now its field of endeavor was the individual and the bringing of him to the light. Masonry cannot think in these terms now. All men everywhere must hear our message or all men everywhere will perish” (ibid., pp. 15-16; my emphasis).

The Thirty-third Degree flag that Cooper brought with him can be seen below. 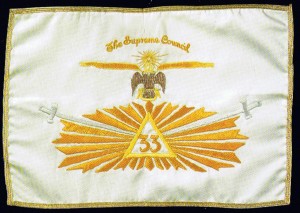 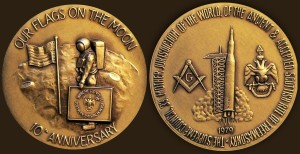