Originally Published at Conspiracy Archive on 2009/04/09 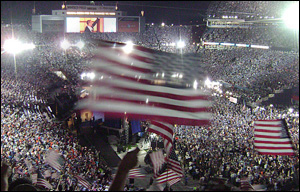 This doesn’t seem so farfetched after all. It surfaced during the presidential campaign. “An Examination of Obama’s Use of Hidden Hypnosis Techniques in His Speeches” purports to contain “over 60 pages of evidence and analysis proving Barack Obama’s use of a little-known and highly deceptive and manipulative form of ‘hack’ hypnosis on millions of unaware Americans, and reveals what only a few psychologists and hypnosis/NLP experts know.” It deserves a serious look in light of the following.

Time Magazine has written a story on Obama’s use of brainwashing scientists, hired to influence, persuade and control the masses.

Two weeks before Election Day, Barack Obama’s campaign was mobilizing millions of supporters; it was a bit late to start rewriting get-out-the-vote (GOTV) scripts. “BUT, BUT, BUT,” deputy field director Mike Moffo wrote to Obama’s GOTV operatives nationwide, “What if I told you a world-famous team of genius scientists, psychologists and economists wrote down the best techniques for GOTV scripting?!?! Would you be interested in at least taking a look? Of course you would!!”

Moffo then passed along guidelines and a sample script from the Consortium of Behavioral Scientists, a secret advisory group of 29 of the nation’s leading behaviorists. The key guideline was a simple message: “A Record Turnout Is Expected.” That’s because studies by psychologist Robert Cialdini and other group members had found that the most powerful motivator for hotel guests to reuse towels, national-park visitors to stay on marked trails and citizens to vote is the suggestion that everyone is doing it. “People want to do what they think others will do,” says Cialdini, author of the best seller Influence. “The Obama campaign really got that.”

The existence of this behavioral dream team — which also included best-selling authors Dan Ariely of MIT (Predictably Irrational) and Richard Thaler and Cass Sunstein of the University of Chicago (Nudge) as well as Nobel laureate Daniel Kahneman of Princeton — has never been publicly disclosed, even though its members gave Obama white papers on messaging, fundraising and rumor control as well as voter mobilization. All their proposals — among them the famous online fundraising lotteries that gave small donors a chance to win face time with Obama — came with footnotes to peer-reviewed academic research. “It was amazing to have these bullet points telling us what to do and the science behind it,” Moffo tells TIME. “These guys really know what makes people tick.”

President Obama is still relying on behavioral science. But now his Administration is using it to try to transform the country. Because when you know what makes people tick, it’s a lot easier to help them change.

It should be a crime to employ such deceptive persuasion tactics.

In turns out that this professor/guru Robert Cialdini utilizes similar manipulative psychological practices identified in the above-cited Obama hypnosis paper. The anonymous author was quite detailed in regard to specific techniques – Milton H. Erickson, for one. Ericksonian methods of hypnotic suggestion are discussed at length, with “hundreds of examples of Obama’s specific language patterns and hypnosis techniques that follow textbook Ericksonian and characteristics too much to be coincidence.”

Through the techniques of Cialdini the Cult of Obama has – to use a Collins brothers expression – been tangibly enacted. At Rick Ross’s site, for instance, we read that Cialdini’s methods are put into practice by cult leaders:

According to Cialdini, the majority of the thousands of different
tactics that compliance professionals use fall into six categories,
and each category is based on a psychological principle that directs
human behavior. These six principles are:

We can see how transformations occur when the six principles are
skillfully put into play by cult leaders and cultic groups. For
example:

Tell me those are not precise descriptions of the way in which the Obama Cult behaved during the presidential campaign.

But that’s just one of the 29 professional behavior manipulators employed by Obama to coerce the populace. And these “weapons of influence” have become quite sophisticated in the era of mass media.

Also see: 50 Psychology Classics, which includes overviews of both Erickson and Cialdini, even Bernays, Skinner, Freud and Jung.