Originally Published at Conspiracy Archive on 2009/04/30 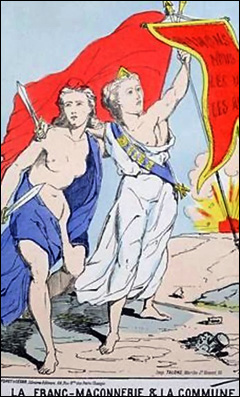 Tomorrow is the 233rd anniversary of the birth of the Order of the Illuminati in 1776. Their calendar was based upon the Zoroastrian religious calendar, commencing from the ascension to the throne of Yazdegerd III (1377 years ago), and is still in use today in Iran. (1377 and 233; posted at 7:44 pm? A synchromystic numerologist may have something to say about that.)

Adam Weishaupt had grand illusions about clothing the higher mysteries of his Order in fire worship. “The Order, in the higher grades, will be called again: the Cult of Fire, the Fire Order, or the Order of the Parsees,” he wrote to his disciple Cato-Zwack on 6 Pharavardin 1779. “The ultimate aim of the Order is for the Light [or Enlightenment] to blaze bright; we fight against the darkness; this is the Cult of Fire,” Weishaupt reiterated (Einige Originalschriften des Illuminatenordens, pp. 330-1).

As I wrote before (and a bit more in Perfectibilists): that May 1st was chosen as the date for instituting the Illuminati is a semiotic stroke genius.

In hindsight, it’s obvious that, for the Illuminati May 1st had significance as the day in which the “cult of fire” was/is celebrated throughout Europe and Britain as Walpurgisnacht and Beltane. I don’t think it is accident that they chose the date. I also don’t think it is accident for May Day to have become a sacred revolutionary holiday for socialists, communists and anarchists. The Illuminati were the forebears of these, and acknowledged as such by the likes of Louis Blanc, Buonarroti and his secret societies (the Sublimes Maîtres Parfaits, Adelphi and Philadelphes), Speshnev and the Petrashevsky circle, and no doubt the Spartacist League as well.

Beside the territory already covered in my previous article, there’s another incident that occurred on May 1st that may represent an homage to the Illuminati (well before the Chicago Haymarket anarchist riot in 1886).

It is the founding of the first Haute Vente (or Alta Vendita) of the French branch of Carbonari secret society, on May 1st, 1821, by Joubert, Dugied, Bazard, Flotard, Buchez, Carriol, and Limperani.* Bazard and Buchez had also previously formed a revolutionary Loge Des Amis De La Vérité [Lodge of the Friends of Truth] that was connected with Joseph Rey’s Union, had recruited radical students, and whose membership eventually swelled to more than a thousand members. The Carbonari operated through cells of vendite, vendite centrali, and alta vendita. The instructions of the latter controlling body were confiscated (along with some correspondences), first published by M. Cretineau-Joly in French, translated into English by George F. Dillon, and demonstrate the ongoing conspiracy against throne and altar that began with the Illuminati.
* Louis Blanc, The History of Ten Years, 1830-1840: Or, France Under Louis Philippe (tr.) Walter Keating Kelly, Vol. I (Philadelphia: Lea & Blanchard, 1848), pp. 62-5; and Arthur Lehning’ “Buonarroti and His International Secret Societies,” International Review of Social History (1956), I, p. 127

Symbols of the Carbonari

Like the Buonarrotian secret society of the Sublimes Maîtres Parfaits who utilized the Lodges of the Grand Orient as a cover, the Amis De La Vérité became officially affiliated with the Grand Orient in 1821, and the staging ground for propaganda, insurrection and revolution. The Carbonari (or Charbonnerie) Haute Vente in France was eventually reorganized by Buonarroti as Charbonnerie Réformée and again as the Charbonnerie Démocratique Universelle.

Illuminists-Jacobins, Carbonarists, Buonarrotists, Blanquists, Communists and Anarcho-socialists have all used the Lodges of the Grand Orient of France for revolutionary mobilization. And being that May 1st is a sacred day for revolutionaries, is it surprising then, that the Grand Orient pays homage, every May Day, to the Martyrs of the 1871 Paris Commune?