The Mystical Kabbalistic-Rosicrucian-Gnostic Order of the Mustard Seed

Originally Published at Conspiracy Archive on 2009/01/29 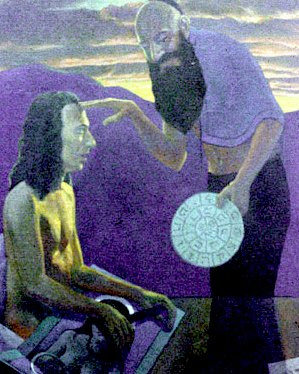 I found a curious item the other day. At DeceptionBytes, Mishel wrote a post titled ‘The Hidden Agenda of The Order of the Mustard Seed.’ The first two paragraphs of which, are:

Peter Grieg of the 24-7 Prayer Movement, an international, ecumenical movement laced with Gnostic, New-Age, and Contemplative spirituality, is reviving the 17th century Order of the Mustard Seed and encouraging members to take a lifelong vow of commitment. This commitment to the vows of the Order, are to be symbolized with a ring or tattoo. The Order of the Mustard seed, which was originally a secret order started by Count Nikolaus Ludwig von Zinzendorf, is a long dormant Masonic Order. Greig says he was inspired to resurrect the order by the 18th century Moravian renewal and the life of Count Zinzendorf.  In fact, many of those in the Apostolic and Prophetic Movement, who embrace a world-view by which they believe themselves God’s Champions, bringing Heaven to Earth, have a rabid fascination with Zinzendorf and the Moravians.

Why, are so many of the ministries that seek to “take” the world for Christ, enraptured by the Moravians and why do the Moravians wield this kind of influence over this “New Breed” of Christian “emerging” in today’s post modern church era? In order to understand the horrific significance of the resurrection of this Order and the overall draw of Zinzendorf’s Moravians, it is first imperative to understand the history of this movement and how it fits together with today’s stringent social and political agenda.

Fired with adolescent idealism, Zinzendorf and five other schoolboys organised a secret society, the ‘Order of the Grain of Mustard Seed’, a kind of spiritual knighthood, with the count serving as Grand Master. The first article of the Order affirmed that ‘the members of our society will love the whole human family’, and as the crusaders for Christ they will seek conciliation with Jews. This enterprise would bring Zinzendorf into unusual contact with heterodox Hebrew and Christian students of Kabbala, the esoteric tradition of Jewish mysticism, seen by many Pietists as a via media between the two religions.

On page 87, she links Zinzendorf’s Mustard Seed to Swedenborg, the Jacobites, and the Ephrata Rosicrucians:

In the multi-layered symbolism of his [Swedenborg’s] dream language, he seemed to refer to his desire to join Zinzendorf’s Order of the Mustard Seed, which included members important to the Hat-Jacobite political agenda. Influenced by his initiatory experiences at Ephrata, the count had recently transformed the Order into an international, hierarchical secret society, in which ‘members were often kept unknown to each other, and their connection with the Order carefully concealed from all’. To ensure secrecy, the ‘candidate never knew the frater who received him’. According to C. G. von Murr, the new Order of the Mustard Seed was a ‘pale imitation of the Society of the Rosicrucians’ and a form of ‘spiritual Freemasonry’. While critics charged that Zinzendorf ‘bestows orders of knighthood’, his initiates wore a ‘Templar style cross’. Thus Swedenborg’s reference to the oil and mustard suggests his desire to join the intensely secretive Order of the Mustard Seed, whose Rosicrucian rituals would give him new life.

In the next paragraph Schuchard asserts that Zinzendorf was interested in alchemy; that some the Moravian brethren experimented with “chemicals and crucibles,” and had a “Notion of Divinity [that] is apt to appear almost like Alchemy, or the Art of Making the Philosopher’s Stone” – the latter being a direct quote from a Zinzendorf maxim.

The last mention by Schuchard of the Mustard Seed Order is on page 106. She mentions the Order in connection with the Kartabhajas of India. Moravian missionaries, it seems, learned of tantric sexual magic from these hindi masters (as well as from the Sabbatean Kabbalists). And curiously, she says, “the burning of spark-emitting mustard seeds was a ‘standard feature’ of the Tantrists’ sorcery.”