Skull and Bones “Crook” for the Tomb

Originally Published at Conspiracy Archive on 2009/02/25 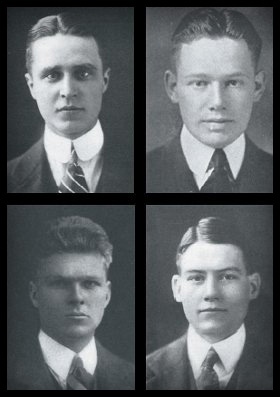 Alleged grave robbers, clockwise from top left: Prescott Bush ’17, Charles C. Haffner ’19, Henry Neil Mallon ’17, and Ellery James ’17. Haffner, who is credited with the theft of Geronimo’s skull in the recently discovered letter, went on to become a general in World War II and then chair of the printing company R. R. Donnelly & Sons. A purported Skull and Bones account of the theft, leaked in the 1980s, identifies the other three by name. Bush became a Connecticut businessman, a U.S. senator, and the father and grandfather of two U.S. presidents. Mallon became chair of the oilfield service company Dresser Industries and the first employer of George H. W. Bush ’48. James was a banker with Brown Brothers Harriman until his untimely death in 1932 (from Yale Alumni Magazine).

On Feb. 17, the 100-year anniversary of Apache warrior Geronimo’s death, his descendants filed a suit in Washington. According to the Washington Post, the defendants are “President Obama, the secretaries of defense and the Army, Yale University and the Order of Skull and Bones” – and, presumably, the Russell Trust Association as well.

Geronimo v. Obama, 09-cv-303, U.S. District Court, District of Columbia, seeks to “[t]o ensure that all existing remains of Geronimo and funerary objects are recovered by Geronimo’s lineal descendants, the Order of Skull & Bones at Yale University must account for any such articles that are or have been in their possession,” Bloomberg reported.

In the 1980’s an Apache leader, Ned Anderson, was making inquiries into the remains of Geronimo, buried at Fort Sill, Oklahoma, when he received a document from an anonymous Skull and Bones member. The informant said that “in May of 1918, Prescott Bush and five other officers at Fort Sill desecrated the grave of Geronimo. They took turns watching while they robbed the grave, taking items including a skull, some other bones, a horse bit and straps. These prizes were taken back to the Tomb, the home of the Skull and Bones Society at Yale in New Haven, Connecticut. They were put into a display case, which members and visitors could easily view upon entry to the building.”

Here’s an excerpt from the document, titled Continuation of the History of Our Order for the Century Celebration, 17 June 1933, by The Little Devil of D’121:

From the war days [W.W. I] also sprang the mad expedition from the School of Fire at Fort Sill, Oklahoma, that brought to the T[omb] its most spectacular “crook,” the skull of Geronimo the terrible, the Indian Chief who had taken forty-nine white scalps. An expedition in late May, 1918, by members of four Clubs [i.e. four graduating-class years of the Society], Xit D.114, Barebones, Caliban and Dingbat, D.115, S’Mike D.116, and Hellbender D.117, planned with great caution since in the words of one of them: “Six army captains robbing a grave wouldn’t look good in the papers.” The stirring climax was recorded by Hellbender in the Black Book of D.117: “… The ring of pick on stone and thud of earth on earth alone disturbs the peace of the prairie. An axe pried open the iron door of the tomb, and Pat[riarch] Bush entered and started to dig. We dug in turn, each on relief taking a turn on the road as guards…. Finally Pat[riarch] Ellery James turned up a bridle, soon a saddle horn and rotten leathers followed, then wood and then, at the exact bottom of the small round hole, Pat[riarch] James dug deep and pried out the trophy itself…. We quickly closed the grave, shut the door and sped home to Pat[riarch] Mallon’s room, where we cleaned the Bones. Pat[riarch] Mallon sat on the floor liberally applying carbolic acid. The Skull was fairly clean, having only some flesh inside and a little hair. I showered and hit the hay … a happy man….”

Ron Rosenbaum, in a July 16, 2000 article, “I Stole the Head of Prescott Bush! More Scary Skull and Bones Tales,” confirms its authenticity. On “A Continuation of the History of Our Order …,” he writes, “[i]ts author, I have since learned, was Skull and Bones member F.O. Matthiessen, later a Harvard professor renowned for his groundbreaking studies of classic 19th-century American literature. I’ve also learned that the original of the document reposes now in a Harvard library where, under an agreement with Matthiessen’s executors and Skull and Bones, it is not available to the public.”

I was recently able to confirm, from a copy of an official Skull and Bones directory (whose provenance I can’t disclose), that in fact George W.’s grandfather Prescott was stationed at Fort Sill, Oklahoma, site of Geronimo’s tomb, in 1918 at the U.S. Army artillery training school there, along with Ellery James and Neil Mallon, the other two men mentioned as part of the tomb-raiding party.

Note the language: They say they’ll bring back to the Tomb “its most spectacular ‘crook.'” Which suggests that the Tomb contains an array of other somewhat less spectacular but similarly stolen skulls. In fact, shortly after the Geronimo-skull story appeared in print, and after Ned Anderson, the Apache tribal leader, had enlisted the aid of his senator, John McCain, to try to set up a meeting with then Vice President George Bush, another allegation about a similar raid for “crook” skulls surfaced. A group of men in El Paso claimed to have proof that, back in 1923, five Skull and Bones men put up a total of $25,000 to pay for the acquisition of the skull of Pancho Villa. Mark Singer investigated the El Paso-Pancho Villa skull-robbery allegation for The New Yorker in 1989 and ended up somewhat skeptical, as am I.

But in the course of his highly diverting account of the Pancho Villa skull claim, Mr. Singer lets drop an astonishing detail about the parallel Geronimo skull-recovery attempt: a remarkable report of a face-to-face, indeed face-to-skull, meeting between the Apache tribal representative, Ned Anderson, and representatives of Skull and Bones, including George Bush’s brother Jonathan!

According to Mr. Singer, Endicott Peabody Davison, a lawyer described as a designated spokesman for the Russell Trust Association, the Skull and Bones corporate shell, described the “Century Celebration” grave-robbing document as authentic–but the raid itself “apocryphal.” Nonetheless, “in 1986 [Davison] and other representatives of Skull and Bones – among them George Bush’s brother Jonathan – met with Anderson. They brought a skull and offered it to Anderson, but he declined because it seemed not to be the same one he had seen in photographs surreptitiously provided by an anonymous dissident member of Bones. The nose and eye cavities didn’t match. Also Anderson took offense at a document that Davison wanted him to sign, which stipulated that neither the Apaches nor Skull and Bones would publicly discuss the whole business.”

I was fascinated by this account: Soon to be President Bush’s brother offering the Apaches a skull their father was said to have stolen! Demanding the Apaches be sworn to silence presumably to protect the Bush family as well as Bones. But looking further into the episode I found an even more extraordinary detail about that face-to-skull meeting: the Skull of the Unknown Child. It appeared in an earlier account of the Geronimo controversy that first ran in 1988 in the Arizona Republic . In it, Republic reporter Paul Brinkley-Rogers reveals another fact about the document the Bush/Bones delegation asked the Apaches to sign: “Anderson called the document ‘very insulting to Indians.’ [He] also said he was confused and annoyed because the document said that Skull and Bones members had submitted the skull to ‘an expert in New Haven’ who determined that the remains were those of a child and therefore ‘cannot possibly be those of Geronimo.'”

Further confirming the authenticity of the Geronimo account, author Marc Wortman discovered (in 2003?) a June 7, 1918 letter by Bonesman Winter Mead ’19 to Bonesman F. Trubee Davison ’18, at the Sterling Memorial Library archives. In his 2006 The Millionaires’ Unit (pp. 137-8), Wortman writes:

Several Bonesman stationed together with the Yale Battery at the army’s Fort Sill in Oklahoma saw their chance to add to the Skull & Bones collection. Geronimo, an Apache faction leader and iconic Native American warrior, had led Indian bands on several notorious raids against American and Mexican troops through the Southwest for more than a decade, he had finally surrendered voluntarily in 1886. Eventually interned at Fort Sill, Geronimo had died there in 1909.

In a long disputed act, in May 1918, six of the Bonesmen on hand at Fort Sill, all army captains, dug open the grave. A month later, Geronimo’s skull and other personal artifacts taken from the grave arrived at the Skull & Bones tomb in New Haven. “The skull of the worthy Geronimo the Terrible,” confirmed Trubee’s society mate Winter Mead, still a student on campus, “exhumed from its tomb at Fort Sill by your club and the K-t [Skull & Bones code for “Knight.” or new member] Haffner, is now safe inside the T-[Tomb] together with his well-worn leathers, bit & saddle horn.” He voiced no objection to the new pieces in the Bones’ collection.

Shortly after publishing his book, CNN did a short story about Wortman’s discovery.

Wortman, a former senior editor of the Yale Alumni Magazine, gave the publication an exclusive. The May/June 2006 issue reproduced (a scan of) the letter in question, and concludes with: “The Geronimo letter, with its matter-of-fact reports of troop units and its boast about a grave robbery, speaks to the complex and contradictory mores of the privileged class in early twentieth-century America.”

Skull and Bones are encouraged to “crook” for the Order, to prove their worth. An anonymous Bonesman told Alexandra Robbins, “I’m in Bones; [t]his is part of our initiation. We have to ‘crook’ something. The tomb is full of things, with plaques reading ‘crooked by’ and then a name. Even George Bush, the director of the CIA, has a plaque in there – ‘crooked by George Bush, 1948′” (Secrets of the Tomb, p. 147)