Originally Published at Conspiracy Archive on 2009/01/10 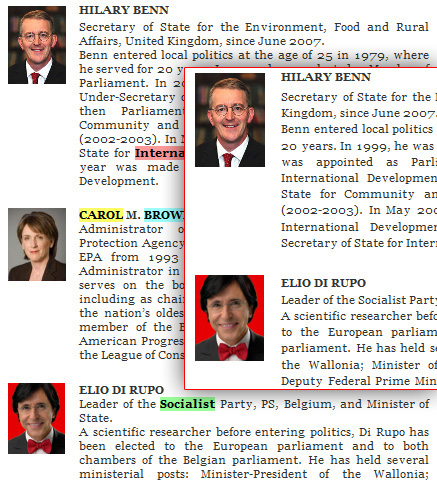 Browner, reports The Baltimore Examiner, “is a member of the Commission for a Sustainable World Society (CSWS), which is a formal organ of the Socialist International. Oddly enough, the group’s web site was recently scrubbed to remove Browner’s picture and biography, but her name is still listed next to the photo-biographies of her 14 colleagues on the commission. The Socialist International is no group of woolly-headed idealists. It is an influential assembly of officials from across the international community whose official Statement of Principles describes an agenda of gaining and exercising government power based on socialist concepts.”

Here’s the relevant (socialistinternational.org) webpage as it looks now; and here, as it looked only a few days ago.

The Heritage Foundation blogged about it on Jan. 7th. They compared the Browner scrubbing to similar “Commissar Vanishings” by Stalin in Communist Russia.

After reading these stories, I checked Browner’s Wikipedia entry. Sure enough (and not surprisingly), there was nothing about her being a member of either Socialist International or its radical environmental propaganda unit, Commission for a Sustainable World Society (CSWS). But maybe there was earlier, and someone decided to pull off another Vanishing.

She had been a member of Socialist International. However, her name was removed from organization’s website after Barack Obama appointed her to be his “energy czar” [22].

But that didn’t sit well with anonymous user, IP: 38.103.37.114. No, this factoid was summarily vanished as well. Anonymous gave as an excuse for excising the edit, that the “information not from a legitimate news source.”

However, no one is entirely anonymous on the internet. A quick IP WHOIS gave revealing results:

Surprise, surprise; and indeed, the edit history of 38.103.37.114 at Wikipedia has a few quick inserts of links to articles at The New Republic: here, here, and here.

The edit before the latest Browner scrubbing, was a quick link insert to Cass Sunstein’s articles at the magazine. Sunstein was recently picked by Obama to oversee government regulation at the Office of Information and Regulatory Affairs. Sunstein, a legal scholar and a personal friend of Obama’s, has extensive experience in “constitutional law, administrative law, environmental law, and law and behavioral economics.”

Between Browner’s Socialist and World Sustainability connections, Sunstein’s experience in environmental law, and Obama’s intent on renewing support for the UN’s population control apparatus; the next administration will finally usher in the long awaited GAIA totalitarianism.

The Green Machinations have already started in Europe, and Obama is intent on bringing eco-fascism to America. And with a trillion dollars to play with – and cooperation from the EU and the UN – implementation of a whole range of insane Geoengineering proposals might come to fruition after all.