The Bektashi Begat the Shriners?

Originally Published at Conspiracy Archive on 2008/12/09

Salih Niyazi Dedebaba and his dervishes

“[The Bektashi] are even said to be affiliated to some of the French Masonic Lodges. One thing is certain; the order now consists almost exclusively of gentlemen of education, belonging to the Liberal, or Young Turk party.”

I’m not that familiar with the Bektashi Order, but it turns out that this politico-mystical secret society – directly or indirectly – was the inspiration behind the Ancient Arabic Order of Nobles of the Mystic Shrine.

Freemasons Dr. Walter M. Fleming, 33°, and William J. Florence, 32°, founded the Shriners in 1870. And in recounting the origins of their Order, Florence and Fleming corroborate the above statement by Richard Davey. 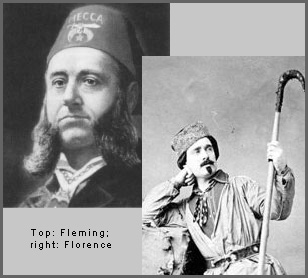 While in Marseilles, France, because he was known to be a Mason, Florence was invited to an exoteric ceremony at a Bokhara Shrine. Soon after, he visited Algiers, and there too was permitted to witness other proceedings in a Bokhara Temple.

Mr. Florence was entertained as a Mason at Marseilles, in Bokhara Temple of the Arabic Bektash. He at this time simply witnessed the opening session of the exoteric ceremonials which characterize the politico-religious order of Bektash of Oriental Europe. A monitorial, historic, and explanatory manuscript he also received there. It did not embrace the esoteric Inner Temple exemplification or obligation, nor the ” Unwritten Law,” which is never imparted to anyone except from mouth to ear. Shortly afterward Mr. Florence was similarly favored in Algiers and Aleppo. Through letters and commendations he finally secured the manuscript monitor, history and descriptive matter from which sprang the Order in this country. It was in Algiers and Aleppo that he was received into the Inner Temple under the domain of the Crescent and first became possessor of the esoteric work, the “Unwritten Law” and the Shayk’s obligation. Subsequently he visited Cairo, Egypt, and was admitted, and collected more of Oriental history and the manuscript of “Memorial Ceremonials.” But Mr. Florence was never fully recognized or possessed of authority until long after his return to America. All he possessed was a disconnected series of sheets in Arabic and French, with some marginal memoranda made by himself from verbal elucidation in Aleppo. Through Professor Albert L. Rawson these, with others received afterward through correspondence abroad, comprised the translations from which the Order started here. Mr. Florence and myself received authority to introduce the Order here.

It doesn’t get any more cut-and-dried than that. Moreover, Stevens wrote (p. 4) that, according to Fleming and Florence, “[t]he chief of these [Bektashi] dervishes at Mecca is declared to be the principle officer of the Arabic Mystic Shrine.”

In the Islamic world, the Bektashi are traditionally looked upon as heretics. Albert Doja says they began in the 13th or 14th Century, and their beliefs comprise a syncretism “of shamanism … Sufi doctrines … Buddhism, Manichaeism, Christianity and antique religions.” Other influences include Neo-Platonism, the Kabbalah, number symbolism, reincarnation and metempsychosis (e.g. dualistic gnosticism and/or pantheism).

The Bektashi were also in close contact with the Sabbatean Movement from the start. When the false messiah, Sabbatai Zevi would visit Constantinople, for instance, he became “accustomed to living in a dervish monastery,” Gershom Scholem writes, “[a]nd it can hardly be doubted that there were early secret ties between the order of the Bektashi and the Donmeh.”

It is known that among the Bektashi orders the doctrine of takiye (dissimulation) was widely practiced; it permitted the adherents of even radical mystical heresies in Islam to appear to the outside world as a wholly orthodox segment of the Sunni community in order to avoid persecution. It is also known that their enemies always claimed this duplicity of the Bektashi and accused them of it. Often they also added even more far-reaching accusation that the Bektashi, or at least certain of their subgroups, secretly subscribed to a religious nihilism. Now it is just this theory and practice of takiye which, though here for purely internal Jewish reasons, determined the Donmeh’s way of life in which the external appearance stood in radical contradiction to what they taught and stood for. Their common status as a mystical heresy with often extreme aberrations was bound to create sympathy between these two groups. Perhaps it is also no accident that the cemetary of the most extreme group of the Donmeh, with the grave of its leader Baruchya Russo (in Islam: Osman Baba), was located in the immediate vicinity of the Bektashi monastery of Salonika. According to Donmeh tradition, moreover, aside from several groups of Sabbatian families which still later joined them from Poland, a number of Turkish and Greek non-Jewish families also passed over and joined one of their subsects.

Writing in 1906, H. N. Brailsford said of the Bektashi, “their place in Islam is perhaps most nearly analogous to that of Freemasonry in Christianity”; and noting that “Bektashis themselves like to imagine that the Freemasons are kindred spirits.” Also, in a 1959 book called Parade to Glory, which was given to Shriners as a history, the Bektashi origin of their Order is again stressed. And, curiously:

Among the modern promoters of the principles of the [Bektashi and/or the “Shriners”] Order in Europe, one of the most noted was Herr Adam Weishaupt, a Rosicrucian (Rose Cross Mystic) [which he certainly was not], and professor of law in the University of Ingolstadt, in Bavaria, who revived the Order in that city on May 1, 1776. Its members exercised a profound influence before and during the French Revolution, when they were known as the Illuminati, and they professed to be teachers of philosophy. From the central society at Ingolstadt, branches spread through all Europe. Among the members, there are recorded the names of Frederick the Great, Mirabeau, a Duke of Orleans, many members of royal families, literary, scientific and professional men, including the illustrious Goethe, Spinoza, Kant, Lord Bacon, and a long list besides, whose works enlarge and free the mind from the influence of dogma and prejudice.