Gladio prosecutor Casson: Parliamentary commission with special powers a must 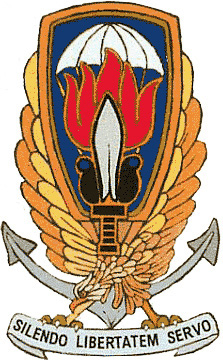 “Towards the end of the investigation, I received a letter. It said: ‘You have come to the door of power. If you try to enter through that door, we do not know what may happen.’

I pushed that door ajar and saw what was inside,” Felice Casson says. Thus the famous Italian prosecutor first uncovered the illegal armed network, Gladio.

He stresses that a prosecutor or a judge cannot enter and go it alone. Having served as an example for many prosecutors in other European countries with his historic investigation in Italy, Casson asserts that powerful political support is a must for the success of any fight against illegal networks such as Gladio or Ergenekon. “A parliamentary commission equipped with special powers should be set up. Prosecutors can go up to a point. But this commission can go wherever it wishes if the government is determined,” he says.

The prosecutor is now a member of the Italian Senate, but without the support of then-Prime Minister Giulio Andreotti, he could not have overcome all the difficulties he faced during the Gladio investigation, including vociferous opposition from the president. In his office in the Senate in Rome, the Italian politician spoke to Today’s Zaman about his experiences and the difficulties in his quest to fight Gladio.

For the prosecutor, networks such as Gladio and Ergenekon are only pawns. There are many other illegal networks apart from Gladio in Italy. There is a “power” above that manages all of them, and nobody knows much about this power. Depending on circumstances that change with time, some organizations may be used and wound up, but the “power at the top” continues to assert itself using different means. The prosecutor was even able to jail some generals at the end of the investigation, but wasn’t able to touch the whole of the network.

“For the success of any fight against illegal networks such as Gladio or Ergenekon, prosecutors must be given political support. Government resolve is a decisive factor. When I discovered the first documents which made reference to Gladio, I went to visit the prime minister at the time, Andreotti, and said: ‘I have found these documents. Will you help me get access to other evidence so I can proceed with the investigation?’ The prime minister said yes, but others, such as the president, said no. He confronted me, saying that Gladio was an organization established with the cooperation of our American friends against Russia. He strongly and openly attacked me. At this point, the political will of the government helped me a lot. The political issue is the primary one. 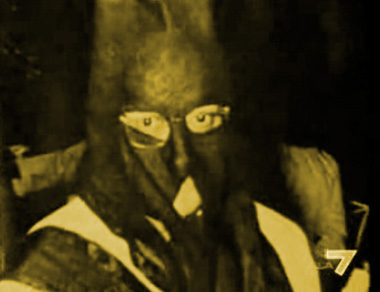 “First of all, an investigation should be conducted to reveal the actions and members of the network. But, to go further, there should a parliamentary commission like the Italian Commissione Stragi (Bloodshed Committee). An investigative commission equipped with the power and authority of prosecutors could be established. Such a commission is necessary when prosecutors experience difficulties in ascertaining the truth or when members of the Mafia, terrorists or secret services are involved. The commission we set up with extensive powers and authorities in Italy carried out important investigations into the Propaganda Due (P2) Masonic Lodge — involved in illegal operations throughout Italy including nationwide bribery scandals — and the Bologna massacre and provided us with important information. 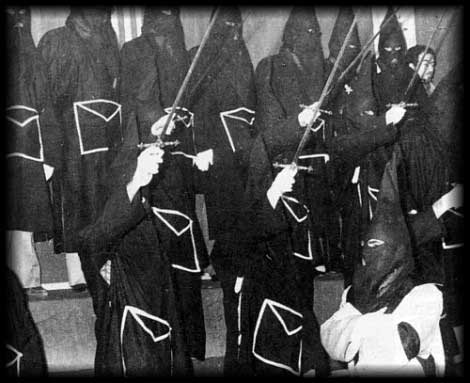 P2 Initiation (photo from the files of the P2 Parliamentary investigation)

“We worked together and in parallel with each other. Setting up a parliamentary commission with special powers is considerably important in the fight against illegal organizations. If there is political support, a parliamentary commission can conduct an in-depth investigation. But if the government does not know what it should do, or if there is no political support, this is very difficult to do.”

“Gladio was an issue that divided Italian society. There were big disagreements between Prime Minister Andreotti and President Francesco Cossiga, who were both from the same party, the Christian Democrats. The prime minister ensured that I could enter the secret service archives. The investigation sparked arguments in the government and within political parties. Some government ministers gave their support while others opposed it. The president had been involved with the organization since the 1960s. The prime minister supported the Gladio investigation, but Cossiga tried to prevent it. Eventually, the Italian Supreme Council of the Judiciary stepped in against the inventions. The Communists and Socialists backed the investigation. Similarly, media organizations were split over the issue. In general, right-wing papers defended Gladio as an organization, a legacy of the past, established to protect Italy from communists. However, we showed that it was used to control politics, trade unions and opposition political parties.

“During the investigation, the biggest difficulty for me was to identify the international links to Gladio. For a prosecutor, it is considerably difficult to obtain information about these connections. It had contacts with the intelligence agencies of NATO member countries and many other countries. It even had contacts in Turkey. Cooperative military training was held with the participation of Gladio members from different countries.

“I could not investigate its reach into other countries. I demanded this, but it was not possible. Doors were shut tight. I requested help from the Italian government and one of our intelligence organizations, but they said this was not possible because these were secret documents. However, the documents I found in the archives of the Italian military services were more than enough for our investigation concerning Italy. But these were not sufficient for us to look outside Italy.”

“Gladio was a network established by NATO and the intelligence agencies of some countries. Officially, the Italian government knew nothing about it. There were presidents, prime ministers and defense ministers who had heard nothing about Gladio. The intelligence chiefs would select the politicians who would be briefed about it. Until I launched an investigation, the Italian parliament, too, knew nothing. It was established to fight against communism, but it was used against opponents and rivals inside.

“The investigation could identify the people involved in Gladio back to 1972. Some of them had died, but some were alive. I discovered everyone who was responsible for the Peteano massacre in 1972: three terrorists, a gendarmerie general, a colonel, a marshal, intelligence and police chiefs and members of the judiciary. All of them were found guilty and punished; however, the court did not put the organization itself on trial, although it agreed that Gladio had been involved. In the end, only those who were involved in the acts were punished, but not the organization. Moreover, we could identify only 622 ‘gladiators.’ But the real number is much higher. The rest went into hiding.”

Did it completely collapse?

“Until the investigation, Gladio was an active organization. Then, it is said that it was uprooted thanks to Andreotti’s measures. But I don’t think it was fully destroyed. It may be operating with a different structure.

“Gladio was not the only illegal underground organization in Italy. There was also the Avanguardia Nazionale (National Vanguard) and the P2 Masonic Lodge and many other networks which were working parallel to Gladio. Gladio was not the supreme organization that was controlling all of them. It was only one of them. There is an entity above them that manages all of them. But people in the organizations who are towards the bottom know nothing about it. They have no idea about the high-level connections.

“What is important is to properly understand the targets. What does Ergenekon want? What is the purpose? Gladio was only a part of a greater whole. The strategy of creating tension was the overarching aim. Gladio was only a tool to achieve this goal. Strategy is a different thing. It is formulated by the top chiefs. The idea in Italy, and internationally, was to create tension and maintain a hold on power. The strategy changed over time. In the 1960s, there were military coup attempts. Then, the international situation changed, and in the late 1970s, their strategy started to change. Violent military coup attempts were abandoned. Instead, they tried to take control of state organs, for instance, by using the P2 Masonic Lodge. They tried to infiltrate public institutions in a much more dangerous manner. There was no violence, but this time, many members of the organization were able to penetrate deep into the state. With the fall of the Berlin Wall, the political environment changed completely. There was no need to maintain these secret organizations for the benefit of Italy. Their enemies changed. Similarly, they had to change their strategy, and new ideas were formulated. We were able to eliminate Gladio, but there must be other networks.

“As a result of this investigation, I am convinced that economic and financial powers are more important than political ones. We do not know the number one who controls these clandestine networks. We should look into economic and financial powers. It is not easy to say much about it. Perhaps, this is not what a prosecutor can talk about. If there is an offense, it can be investigated as a criminal case.

“This is a problem seen in all big cooperative efforts in the world, such as the West working with the East. It goes beyond borders. A prosecutor cannot extend his investigation there. There is a power at the top, and it has its interests. We still discuss Gladio in Italy, but it is hard to come to a conclusion.”

‘I saw the power at the top’

“I saw the power at the top controlling everything. Towards the end of the investigation, I received a letter. It said: ‘You have come to the door of power. If you try to enter through that door, we do not know what may happen.’ Even if we could see something, this would only represent part of the whole. This power is much greater. I pushed that door ajar and saw what was inside. But I did not have time to go to the end. There was a power behind that door. But you cannot see the people who individually represent it. I don’t think a prosecutor or a judge can enter through that door because they need evidence or proof of acts or offenses. But offenses can be tools. It is difficult for a judge to have access to what is behind that door because he has to act in reliance with concrete evidence at all times. Things are complicated inside. Perhaps a parliamentary commission may be useful in order to understand the goal and phenomena.”

What changed in Italy after the Gladio investigation?

“I am monitoring developments in the Ergenekon investigation. It seems it is a bit different from Gladio in its organization. I think what the hardest part for Turkey will be is learning about everything that happened in the past. A single commission will not be sufficient to find this out. The important thing is to understand what its purpose is. What was Ergenekon after? What was the purpose? The source of the problem must be discovered. When I was investigating the Italian secret service archives, I came across contacts in Turkey as well.

“Turkey has its own unique situation. The political, economic and cultural structure of Italy is simpler. Turkey has much more complicated problems. It has an issue with nationalism. There is also an issue with religion. We have the pope, but this is a completely different thing. Turkey is a crossroads. It is important for Europe and the Middle East, not only today, but it was in the past as well.”