Bilderberger Gideon Rachman: “the formation of some sort of world government is plausible”

Originally Published at Conspiracy Archive on 2008/12/13 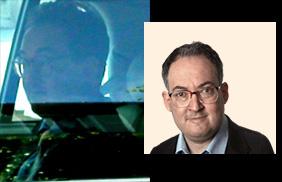 Gotcha! Left: Rachman at the 2003 Bilderberg Meeting in France; right: Rachman’s mug at his blog.

“Rapporteur” Gideon Rachman wrote a piece for the Financial Times on Dec. 8th, 2008: “And now for a world government.” Let’s take a look.

I have never believed that there is a secret United Nations plot to take over the US. I have never seen black helicopters hovering in the sky above Montana. But, for the first time in my life, I think the formation of some sort of world government is plausible.

Perhaps you have never believed it, but the elite conclave to which you have been privy certainly have. You neglected to mention your previous attendance of the 2003 and 2004 Bilderberg meetings at Versailles, France, and Stresa, Italy, respectively. You see, commoners – dubbed “useless eaters” – have been keeping tabs on the elite confab for 20+ years (call it grass-roots journalism). In 2003 and 2004, you were listed thus: GB – Rachman, Gideon – Brussels Correspondent, The Economist. Traditionally, “Rapporteurs” have been allowed to attend meetings such as these on condition of subservience and silence. To the commoners who expect “rapporteurs” to do their job and “report”; it’s called “breach of trust” and collusion. To the “global governance” internationalists; it’s called “Chatham House Rules.”

However, your designated role may have been even more sinister. According to the Bilderberg Meeting Official Report of 1961, “Rapporteurs” are there solely to present information to the elite gathering – the exact opposite of a traditional journalistic endeavor.  “Rapporteurs,” then, in this context, are subversives: spies reporting back to their task masters.

A “world government” would involve much more than co-operation between nations. It would be an entity with state-like characteristics, backed by a body of laws. The European Union has already set up a continental government for 27 countries, which could be a model. The EU has a supreme court, a currency, thousands of pages of law, a large civil service and the ability to deploy military force.

Regarding the seriousness of these “laws,” see the recent post by Niki Raapana.

So could the European model go global? There are three reasons for thinking that it might.

First, it is increasingly clear that the most difficult issues facing national governments are international in nature: there is global warming, a global financial crisis and a “global war on terror”.

Second, it could be done. The transport and communications revolutions have shrunk the world so that, as Geoffrey Blainey, an eminent Australian historian, has written: “For the first time in human history, world government of some sort is now possible.” Mr Blainey foresees an attempt to form a world government at some point in the next two centuries, which is an unusually long time horizon for the average newspaper column.

But – the third point – a change in the political atmosphere suggests that “global governance” could come much sooner than that. The financial crisis and climate change are pushing national governments towards global solutions, even in countries such as China and the US that are traditionally fierce guardians of national sovereignty.

Your reasons are the excuses of the elite. You didn’t independently come to these conclusions. You took your cue – your marching orders – from the “new world order” rhetoric of the Rockefellers, Kissinger, the Club of Rome, Maurice Strong, Queen Beatrix, Prince Phillip, Gorbachev and the Rothschilds. “Conspiracy theorists,” it turns out, were not paranoid for entertaining such notions; but perceptive skeptics and skilled observers. Moreover, you have explicitly confirmed that “global governance” is, matter-of-factly speaking, but a euphemism for “world government.” Thanks.

Barack Obama, America’s president-in-waiting, does not share the Bush administration’s disdain for international agreements and treaties. In his book, The Audacity of Hope, he argued that: “When the world’s sole superpower willingly restrains its power and abides by internationally agreed-upon standards of conduct, it sends a message that these are rules worth following.” The importance that Mr Obama attaches to the UN is shown by the fact that he has appointed Susan Rice, one of his closest aides, as America’s ambassador to the UN, and given her a seat in the cabinet.

Yes, Obama is idealistic, young, and “liberal” enough to potentially be quite dangerous. Combined with the unabashed “romance” the world is having with him, if a truly serious worldwide crisis would occur (false flag or otherwise), Obama may well fill the role as harbinger of “world government.” It’s also quite convenient for the elite to have a trusty member of the Council on Foreign Relations as an Ambassador to the U.N. (I haven’t checked, but I’d bet the percentage of CFR members having been UN ambassadors is probably high – on purpose.)

A taste of the ideas doing the rounds in Obama circles is offered by a recent report from the Managing Global Insecurity project, whose small US advisory group includes John Podesta, the man heading Mr Obama’s transition team and Strobe Talbott, the president of the Brookings Institution, from which Ms Rice has just emerged.

The MGI report argues for the creation of a UN high commissioner for counter-terrorist activity, a legally binding climate-change agreement negotiated under the auspices of the UN and the creation of a 50,000-strong UN peacekeeping force. Once countries had pledged troops to this reserve army, the UN would have first call upon them.

These are the kind of ideas that get people reaching for their rifles in America’s talk-radio heartland. Aware of the political sensitivity of its ideas, the MGI report opts for soothing language. It emphasises the need for American leadership and uses the term, “responsible sovereignty” – when calling for international co-operation – rather than the more radical-sounding phrase favoured in Europe, “shared sovereignty”. It also talks about “global governance” rather than world government.

More admissions of elite ruling class doublespeak. The commoners must be “soothed” and appeased – conned – into accepting dangerous concepts. Guess what? In certain circles, it worked. Hardly a single stink has been made about “global governance” being in reality elitespeak for “world government.” It was always amorphously defined – if ever. I’ve got news for you, though. The gun-toting “talk-radio heartland” have been on to you for quite some time. If you’re deceiving anyone, it is your ostensible colleagues in the “journalism” business who’ve been hoodwinked into proselytizing rhetoric far more sinister than heretofore assumed.

But some European thinkers think that they recognise what is going on. Jacques Attali, an adviser to President Nicolas Sarkozy of France, argues that: “Global governance is just a euphemism for global government.” As far as he is concerned, some form of global government cannot come too soon. Mr Attali believes that the “core of the international financial crisis is that we have global financial markets and no global rule of law”.

Jacques Attali is a sort of European high priest for the elite, and is addicted to using the term “new world order.” As for his solution to the economic crisis; once again, consult Niki Raapana, for the proposed EU “rule of law” has been identified.

In the end, the only gripe I have with Gideon Rachman’s ruminations about world government is the fact that he didn’t mention anything about cavorting with the de facto rulers of the world; and that – having been privy to the highest echelon – he is merely an elite sockpuppet carrying out the bidding of a treasonous clique who liken themselves as new “philosopher kings.”

Admit that, Rachman – without your wise-ass sarcasm – and we’re good.

“[W]ithin the next hundred years … nationhood as we know it will be obsolete; all states will recognize a single global authority. A phrase briefly fashionable in the mid-20th century –citizen of the world — will have assumed real meaning by the end of the 21st.”

Strobe Talbott [mentioned above], “The Birth of the Global Nation,” Time Magazine (July 20, 1992)

“Over the next 20 to 30 years, we are going to end up with world government. It’s inevitable…. [W]e have to empower the United Nations and … we have to govern and regulate human interaction.”

“Two centuries ago our forefathers brought forth a new nation; now we must join with others to bring forth a new world order…Narrow notions of national sovereignty must not be permitted to curtail that obligation…We call upon all nations to strengthen and sustain the United Nations and its specialized agencies, and other institutions of world order, and to broaden the jurisdiction of the World Court.”

“A world effectively controlled by the United Nations is one in which ‘world government’ would come about through the establishment of supranational institutions, characterized by mandatory universal membership and some ability to employ physical force. Effective control would thus entail a preponderance of political power in the hands of a supranational organization … The present charter could theoretically be revised in order to erect such an organization equal to the task envisioned, thereby codifying a radical rearrangement of power in the world.”

“The principle of a model system would include the following: powers sufficient to monitor and enforce disarmament, settle disputes, and keep the peace – including taxing powers – with all other powers reserved to the nations; an international force, balanced appropriately among ground, sea, air, and space elements, consisting of 500,000 men, recruited individually, wearing a UN uniform, and controlling a nuclear force composed of 60-100 mixed land-based mobile and undersea-based missiles, averaging one megaton per weapon; governmental powers distributed among three branches …, compulsory jurisdiction of the International Court…”

“‘World’ means that the system is global with no exceptions to its fiat: universal membership. ‘Effectively controlled’ connotes … a relative monopoly of physical force at the center of the system, and thus a preponderance of political power in the hands of a supranational organization. The ‘United Nations’ is not necessarily precisely the organization as it now exists… Finally, to avoid endless euphemism and evasive verbiage, the contemplated regime will occasionally be referred to unblushingly as a ‘world government.'”

Lincoln P. Bloomfield, “A World Effectively Controlled By the United Nations“; a study commissioned by the State Department in 1962

James P Warburg, 1950; testimony before the Senate Foreign Relations Committee [Ed.: I haven’t confirmed this yet, but Dennis Cuddy is an expert on “new world order” quotes and this is a part of his collection]