Originally Published at Conspiracy Archive on 2008/09/08

A few years ago someone sent me a photo of a metal-cast plaque he had found on the wall at the house of a friend of his family’s. I no longer have the original email and I fail to recall the exact details of what the person (at whose home it was found) did for a living, but he was probably an engineer or a cyberneticist. The person who contacted me was inquiring as to whether I had seen something like this before – I hadn’t.

Here is the photo: 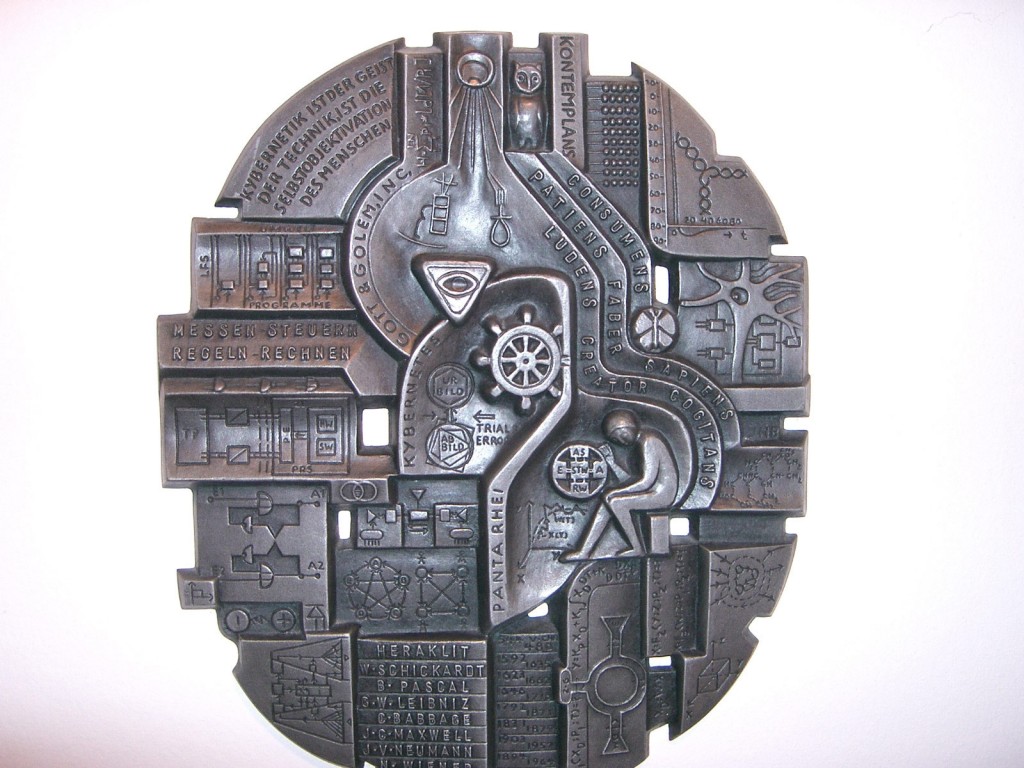 There’s quite the variety of symbols, culled together in a single theme. Amidst circuitry and technical specs, the owl of wisdom is present; an all-seeing eye within a downward-pointing triangle; a neuron seemingly attached to a circuit; a pentagram in some sort of feedback loop; the Panta Rhei [“everything is in a state of flux”] of Heraclitus is mentioned, and so is cybernetics founder Norbert Wiener’s Gott & Golem, Inc. [God and Golem, Inc.: A comment on certain points where Cybernetics impinges on Religion].

What does it all mean? Has anyone encountered anything similar?

Norbert Wiener had an eclectic education and was no stranger to esoteric ideas. According to Conway and Siegelman, in Dark Hero of the Information Age, Norbert Wiener’s father had trained him in “the Greek and Latin classics, followed by his favorite German poets and philosophes … Leo [his father] added Darwin, Huxley and other scientists … [Norbert] studied Leo’s books on psychiatry, the occult, and the excavation of Troy. He became an avid fan of the seminal science fiction of H. G. Wells and Jules Verne. When he had devoured the volumes on his father’s shelves, Leo fed him books and journals from the Harvard library: on physics and chemistry, the nature of light, and the strange new power of electricity” (pp. 12-3).

It’s the last subject, the strange power of electricity, that must have strengthened Wiener’s fascination with the Kabbalistic “Golem” in the myths of the Jews – a perfect metaphor for cybernetics itself. In God and Golem, Inc., or instance, he writes:

I have said that the reprobation attaching in former ages to the sin of sorcery attaches now in many minds to the speculations of modern cybernetics. For make no mistake, if but two hundred years ago a scholar had pretended to make machines that should learn to play games or that should propagate themselves, he would surely have been made to assume the sanbenito, the gown worn by the victims of the Inquisition, and have even handed over to the secular arm, with the injunction that there be no shedding of blood; surely, that is, unless he could convince some great patron that he could transmute the base metals into gold, as Rabbi Löw of Prague, who claimed that his incantations blew breath of life into the Golem of clay, had persuaded the Emperor Rudolf. For even now, if an inventor could prove to a computing-machine company that his magic could be of service to them, he would cast black spells from now till doomsday, without the least personal risk.

What is sorcery, and why is it condemned as a sin? Why is the foolish mummery ofthe Black Mass so frowned upon? (pp. 49-50)